READ THIS NEXT
TikTok and Snapchat battle for Gen Z, as Instagram trails with kids

In 2015, U.K. retailer Harvey Nichols pulled a brilliant move when it turned real CCTV footage of people stealing from its stores into an ad. Created out of Adam & Eve/DDB London and directed by the Layzell Bros via Blink, "Shoplifters" superimposed cartoonish animated faces onto the culprits and promoted the company's rewards app. It went on to win the Film Grand Prix at Cannes, as well as numerous other accolades. But the fame didn't stop there. This year, the spot has found its way onto the big screen in "T2 Trainspotting," the sequel to Director Danny Boyle's seminal black comedy from 1996 about a group of heroin addicts in Edinburgh, Scotland. 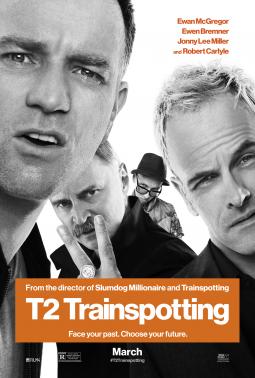 In "T2," which hits U.S. theaters on March 17, the ad plays in the background as Ewan McGregor's Renton walks around the store with Veronika, a new character played by Anjela Nedyalkova. Harvey Nichols makes it a habit of featuring its marketing in the stores, so everyday shoppers would be familiar with the lo-fi scenes playing on screens as they peruse the racks. (Fun fact: at least in one case, the retailer has observed would-be thieves actually putting back merchandise they tried to steal after seeing the ad in-store).

But the ad then takes on new life during a key moment of the film. While at dinner in Harvey Nichols' Forth Floor Brasserie with Veronika, Renton revisits his famous "Choose Life" soliloquy, but reinterpreted through his more seasoned point of view and with modern references. As he delivers his speech, the film cuts back to scenes of the iconic "Trainspotting" opening sequence, but this time, Harvey Nichols' "Shoplifters" faces appear on the heads of Renton and Spud (Ewen Bremmer) as they sprint through the streets. Here's the original:

According to Harvey Nichols Group Marketing and Creative Director Shadi Halliwell, in 2015, Danny Boyle's team originally had contacted her because they were hoping to shoot a portion of "T2" in the retailer's Edinburgh store.

"Knowing the story of the original, I was sort of on the fence," she said. "We are a luxury store and if you'd seen the first film, it's very gritty and out there." (To refresh your memory, there are scenes of heroin users shooting up, O.D.'ing, crawling into the excrement-drenched "worst toilet in Scotland" and so forth). "My immediate reaction was, I'm not really sure. It was probably more no than a yes." Danny Boyle then emailed her directly about a meeting with her and the CEO, Stacey Cartwright. 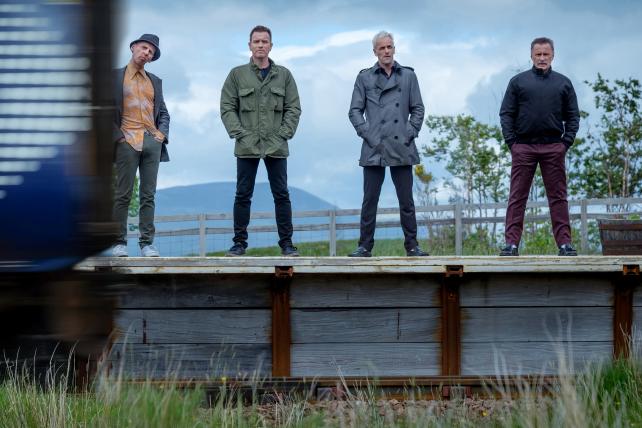 A scene from 'T2 Trainspotting,' the sequel to the 1996 original.
Credit:
Jaap Buitendijk/CTMG

Face to face, "Danny was so eloquent and visionary about how he wanted 'T2' to be as a film," Ms. Halliwell said. "The Edinburgh location is the iconic store there, and he explained how the boys were all grown up, have done well enough in life to make that the place they would hang out. I literally listened to him for ten minutes, but it was after two minutes that I thought, 'Yes, you can have it.'"

During the conversation, Ms. Halliwell mentioned how Harvey Nichols likes to "take the piss" out of itself in its marketing and sent him the "Shoplifters" ad "as a laugh." But then he wrote back asking to feature it in the film. "I was over the moon," she said.

Ms. Halliwell said that Mr. Boyle's team didn't need to pay for usage rights but did cover the operating cost of keeping the store open while shooting there. Adam & Eve/DDB Producer Louise Richardson said the only thing the agency supplied to Mr. Boyle was the spot itself, and according to the ad's production company, Blink, Mr. Boyle did not work with the ad's original directors the Layzell Bros on the new scenes. Ad Age was unable to reach the director's team for comment, but it seems they figured out a way to work the existing animated heads onto "new" bodies.

In the end, Harvey Nichols and the agency were suprised by how far the ad went in the film. "It's massive exposure for Harvey Nichols," said Ms. Halliwell.