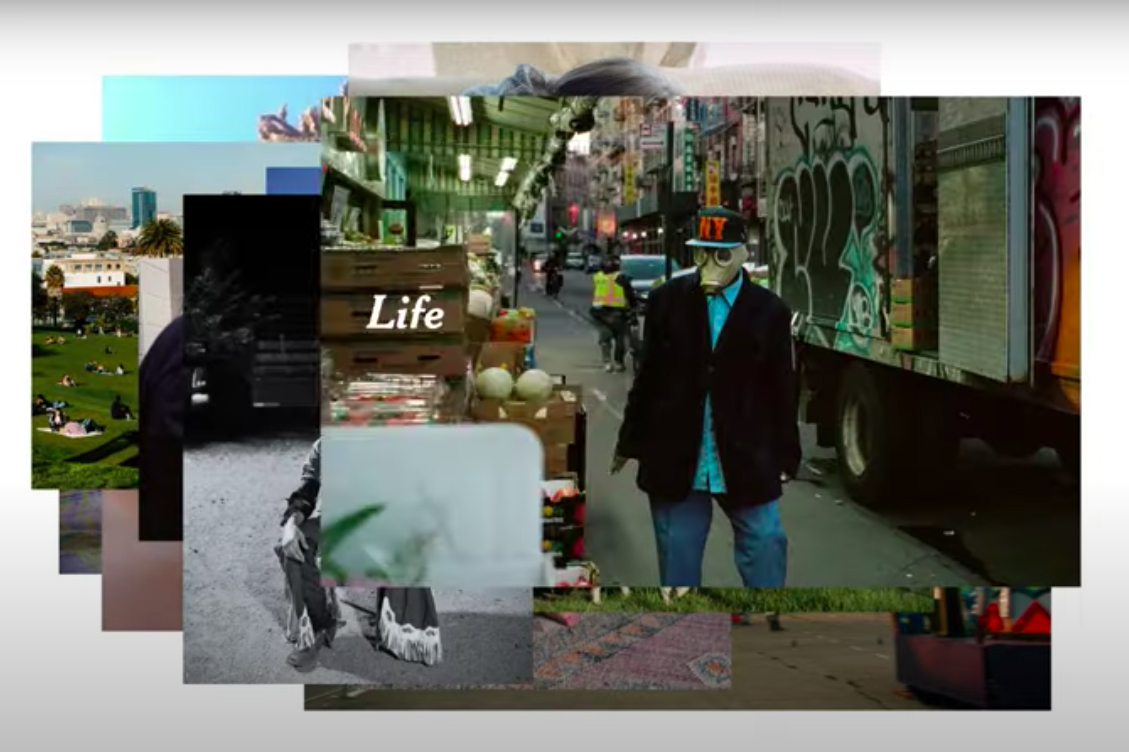 The New York Times’ much-decorated “The Truth Is Worth It” campaign from Droga5 seamlessly wove together typography, sound design, video and more to illustrate the treacherous journeys the paper’s reporters have taken to uncover the facts for their stories. All those elements come together again in yet another exquisitely crafted film debuting today. But this time the spotlight shines on NYT readers.

A new two-and-a-half-minute spot from Droga5 combines the rhythmic taps of computer keys and a frenetic, lively jazz track from Makaya McCraven with text, image and film from NYT reporting to underscore how the publication helps readers navigate different aspects of their lives during these times of of chaos and upheaval.

In a departure from the “Truth Is Worth It” ads that came before it, each of which focused on a specific Times story, the new film, “Life Needs Truth,” moves from headline to headline, turning words from stories into lines of verse (five verses, to be precise) in what is essentially a “visual poem” that spans the highs and lows of the human experience. At one moment, we feel the immensity of the pandemic, racial injustice and climate change, while at another, we’re scratching our heads over more-quotidian concerns: How do I sleep better? What books should my kids read?

NYT Senior VP-Marketing Amy Weisenbach says that the new ad was borne of the times. “We definitely did not start our 2020 with this brief in hand,” she explains. Given this was an election year, the team originally had its sights set on November, but “when the pandemic happened, we realized the election seemed really far away. It’s hard for people to think about those issues when all they’re really concerned with is getting through everyday life.”

That led to the idea of highlighting the NYT newsroom’s “relentless” commitment to helping readers tackle the range of challenges that life throws at them, which has come into sharp relief over the past few months.

The NYT’s agency Droga5 used that brief as a springboard for evolving the voice established in the brand’s previous truth-focused efforts. According to Droga5 Group Creative Director Laurie Howell, “We started to realize we can tell the story of the times we’re living in best through the journalism itself. The more you read, you’ll see all these pockets of the New York Times’ journalism that really touches on every factor, every moment of the day or night, week or year.”

Getting to the final idea was “an iterative process,” he adds. The team knew that the journalism had to be front and center and “one of the big things we decided was that we didn’t want to have voiceover,” he says. “We wanted to let the words do the talking.” That eventually led to the idea of constructing a “visual poem.” But that presented a challenge: How do you put a poem in someone’s head without reading it to them?

That’s where craft comes in.

The Droga5 and NYT teams used over 100 stories from the paper to create the lines of the poem. Words, however, were just one aspect.

“There were so many things we had to take into consideration,” says Droga5 Group Creative Director Toby Treyer-Evans. “Should words drive music, or should music drive words? If you want to ‘hear’ it like a poem, you should hear the syllables.” That required the careful interplay of sound design, text and music, and establishing an appropriate cadence was an extreme exercise in editing.

Also crucial was selecting the right track. Weisenbach says that the Droga5 team “made a really impassioned case for jazz as the right music, given its role in history, and how its ability to capture the moment has parallels to journalism itself.”

Jazz also “felt right for this because it could span extremes of life—the happy and the sad,” Treyer-Evans adds.

From there, finding the right tune was a collaboration. Weisenbach says it helped to have a couple of music aficionados on her crew, Executive Creative Director Laura Forde and Director of Brand Strategy Iain Newton. “They started rattling off names of artists they thought could capture the moment, and we sent them off to the Droga team,” she says. “It was one of those moments you imagine they’re rolling their eyes on the other side, but they found inspiration in it, and that’s how we end up with Makaya McCraven.” The final track, “Requests,” has intensity and drama but also lightness and hope to match the spot’s breadth of topics.

To direct, the team also tapped top director Kim Gehrig of Somesuch, who’s carved out an impressive oeuvre of life-affirming, music-driven spots like Apple’s “Snap” and Libresse’s “Viva La Vulva." Bringing her on was part of a “tonal shift” the team wanted to make with the campaign. “She’s an amazing director with great energy and she captures all the vitality of life,” Howell says. It also helped that she works with a skillful editor, Tom Lindsay.

Adds Droga5 New York Co-Chief Creative Officer Tim Gordon, creating the latest evolution with the NYT team involved a "healthy level of discourse and pushback that you're able to have over many years of working together, and in wanting to do great work that just doesn't repeat itself."

Ultimately, the film is a bit more impressionistic than the brand’s previous outings. At first watch, it might be hard to grasp what it’s driving at—like a written poem, the viewer may “feel” the message before fully comprehending it.

“This is definitely more abstract than anything we’ve done before,” Weisenbach says. “We tend to follow the lead of journalism and make work that is more linear and direct, and we were a little skeptical about whether we could make something that was poetry that didn’t lose our integrity. We’re really happy that we ended up with something that is ultimately true to the journalism but it also really captures what life is like for our readers.”

The Times will be running the spot across a range of TV programming, including morning shows, late night, sports and political coverage. It will also roll out on social media, including Twitter and NYT’s various platforms. Weisenbach says the NYT and Droga5 are now exploring using the new format in forthcoming spots.

“Life needs truth” comes on the heels of the publication’s second-quarter results, which saw record revenues from its digital products, Weisenbach says. Though total revenues for second quarter decreased from $403.8 million from $436.3 million compared to the same period last year, subscription revenues increased 8.4 percent. Those were largely due to the growth in NYT subscriptions to its digital-only offerings, comprising its news product as well as Cooking, Crossword and audio products. Revenue from digital only-products jumped 29.6 percent to 146 million compared to second quarter 2019, contrasting with print sub revenues, which decreased 6.4 percent to $147.2 million.