Whose ad spending is up? The big FANG theory | Ad Age
Skip to main content

Whose ad spending is up? The big FANG theory

Facebook, Amazon, Netflix and Google are pouring billions into their ad budgets 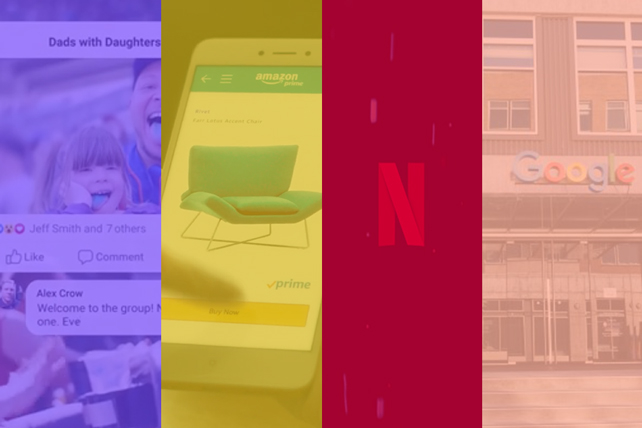 When it comes to ad spending, the FANG gang has developed some serious teeth.

FANG—Wall Street lingo for these internet stocks—is helping drive ad spending growth as the companies ratchet up advertising to build brands and protect their reputations.

Among the nation’s 100 biggest advertisers, 65 companies, including FANG, increased U.S. ad spending in 2018. FANG accounted for nearly 30 percent of the spending increase, according to data from the Ad Age Leading National Advertisers report, released online and as a downloadable Fact Pack.

The members of FANG have the means and motivation to step up spending on marketing, pouring money into digital media and TV.

Three of the four FANG members—Alphabet, Facebook and Amazon—are both big ad sellers and buyers.

Facebook generated 99 percent of its $56 billion revenue from advertising.

Amazon’s “Other” revenue bucket had $10 billion in net sales, primarily from the sale of advertising services. (That’s a drop in the bucket, given that Amazon had overall net sales of $233 billion.)

What FANG spent on worldwide advertising
Worldwide spending since 2010 for Facebook, Amazon, Netflix and Google parent Alphabet. Facebook’s ad spending soared to $1.1 billion in 2018 from $8 million in 2010. Over that period, Amazon’s spending climbed to $8.2 billion from $890 million.
Source: Ad Age Datacenter analysis of company reports. Facebook and Netflix figures are advertising expenses. Amazon and Alphabet are advertising and promotion expenses. See expanded data at AdAge.com/marketertrees2019.
A closer look at what’s up with FANG ad spending

Facebook disclosed it more than tripled worldwide ad spending to $1.1 billion in 2018. Ad spending as a percent of revenue rose to 2 percent from 0.8 percent. Facebook has pumped up spending as it plays both defense (addressing issues over privacy and fake news content) and offense (promoting its brands and services). Ad Age ranks Facebook as the No. 100 U.S. advertiser.

Amazon spent $8.2 billion on worldwide advertising and promotion in 2018, with spending growth (up 30 percent) essentially in line with growth in net sales. Amazon’s spending as a percent of sales held at 3.5 percent; it’s been in the range of 3.5 percent to 3.7 percent since 2014. Amazon spends heavily on social media, other online advertising and TV to attract customers. Ad Age ranks Amazon as the No. 3 U.S. ad spender, up from No. 70 in 2010.

Netflix boosted worldwide ad spending in 2018 by 66 percent to $1.8 billion. Ad spending as a percent of revenue jumped to 11.4 percent from 9.3 percent. In its latest 10-K annual filing, Netflix said higher U.S. marketing spending—$1 billion last year, up from $604 million—reflected “increased investments in marketing of new original titles.” Netflix is working to make a costly bet on content pay off with more subscribers. Advertising accounts for about three-fourths of the company’s marketing spending. Netflix ranks as the No. 44 spender among the Ad Age Leading National Advertisers. 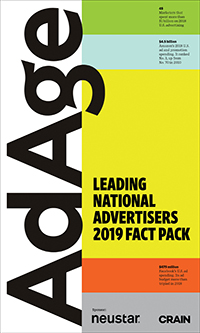