Would you trade your location data for an in-store discount?

That's the idea behind Swirl, a mobile app now being used by retailers like Kenneth Cole and Timberland in Manhattan and other cities.

The Swirl sensor at retail.

The app can target those with a declared interest in designer duds or tough terrain footwear, and even if they've perused a specific section of those stores.

At the Kenneth Cole in Grand Central recently, shoppers who downloaded the Swirl app and allowed it to track their location were notified of a 20% discount on full-priced merchandise. When they clicked to view more information and accept the offer, a countdown clock started, giving them an hour before the deal expired.

"Because it's opt-in…you're receptive to it," said Ryan Shadrin, VP of retail and digital commerce at Timberland, which is also testing Swirl. "It doesn't feel big brother-ish, he added. "We see a lot of these technologies come across the windshield."

The shoe retailer has tested Swirl since May in two stores, one in New York and one in Boston. According to Mr. Shadrin, 72% of offer recipients checked out the offers and 35% redeemed them. Around 750 shoppers have been served Timberland's 20% discount.

Shoppers browsing through Kenneth Cole's sleek leather jackets and slinky print dresses might notice small circular devices resembling air fresheners stuck to the walls throughout in its Manhattan locations. These are Swirl sensors, which pick up on where Swirl users who have enabled location tracking in the app are in the store. The devices are placed near handbags, men's and women's apparel sections, accessories and by the doors and dressing rooms. 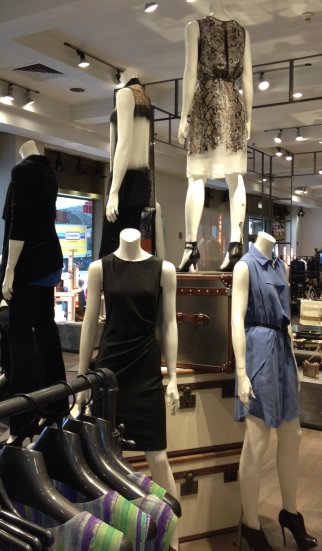 People who do not have the Swirl app or do not have location tracking enabled in the app are not tracked by the sensors.

Other technologies such as Nomi track patrons via their mobile devices in retail locations and restaurants using sensors. Nomi, however, does not require an opt-in to track consumers' footpaths in-store, or even when they walk by a storefront.

The idea behind Swirl In-Store is to track how long people linger in various sections of the shop, and possibly aim an offer to their phones based on that information. For instance, spending ten minutes looking at shoes might spur a discount on a certain brand of footwear. "It will actually wake up your phone and send you a push message," said Hilmi Ozguc, founder and CEO of Swirl.

"Goal number one, of course, was to gather some valuable data," he added.

Charm jewelry maker Alex and Ani is also testing the in-store technology, as is Exhale Spa and Boutique. Today the app is available only for iPhone 4 or 5 but an Android version is in the works, said Mr. Ozguc.

Ultimately, companies using in-store mobile tracking and offers want to tie such programs to their broader loyalty programs and other customer databases. Still, most companies testing new data-generating technologies and loyalty programs have yet to integrate. That is part of Timberland's "long-term omni-channel" strategy, said Mr. Shadrin.

The boot and boat-shoe maker expects to expand the Swirl program to other locations, added Mr. Shadrin. "Our hope for the fall would be to basically expand the test. We're taking a modulated approach."