This Year's U.S. Open Is a Data Rally

Inside the IBM-powered Command Center at the Annual Tennis Mecca
READ THIS NEXT
Closing engagement gaps in a cookieless world
IBM-powered Data Hub at the US Open
Credit:

The US Open is a celebration of international tennis prowess, luxury brand integrations and fan enthusiasm that seems to go off without a hitch every year. But behind the scenes, IBM has helped run the show since 1990, and the U.S. Tennis Association just signed another four-year contract with the firm.

The partnership has become a test bed of data-fueled innovation that not only reaches consumers and media covering the event, but now even uses social-media data to influence how server resources are allocated. IBM has applied the predictive-analytics-based work for other clients, too.

A command center in the depths of Arthur Ashe stadium in New York's Flushing, Queens, is a monitor-filled visual hub for the steady information stream that has turned the event into a data rally. It's officially known as the Scoring Operations Room, but the information flowing there goes beyond match scores. Handheld devices used courtside feed multiple data points such as serve speeds from each match into the system, where they hit a database that's accessible to announcers broadcasting the games, and reporters hunkered down in media lairs in the lower level of the stadium. 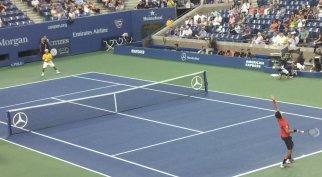 The system stores historical data, allowing fans and media to compare players based on previous performance in the SlamTracker, which calculates double faults, break points won, and other stats, and can be viewed on the USOpen.org site. Reporters can use the U.S. Open Intranet to watch video clips categorized by type of play.

Want to watch the unforced errors made by Sam Stosur in her fall to wunderkind Victoria Duval on Tuesday? That's possible. (IBM has applied such predictive analytics-based work for other clients, too. Rugby Football Union used its "Keys to the Match" system -- which sifts through real-time data and player performance to determine what each must do to gain an edge over his opponent.)

Apple and Android apps developed by IBM surface information on player matchups, and track event and athlete-related trends on Twitter. It's only recently that IBM and the USTA, which operates the U.S. Open, recognized through analysis of previous efforts that the apps were popular and could be an additional revenue stream.

"We had not monetized the mobile apps. ... There was not a lot of sponsor integration," said Nicole Jeter West, director of digital strategy and partnership for the USTA.

This year, the Twitter tracker, Trendcast, is sponsored by American Express. Mercedes-Benz and IBM are also sponsors in the US Open app. 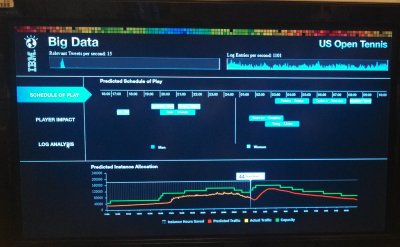 Head-to-head player matchups, historical video and social media tracking make for a richer experience for the tennis lover. However, a new approach to maneuvering the data flow could lead to greater efficiencies and fewer glitches seen by fans. IBM developed and tested a system during last year's Open that is implemented for production this year for the first time. The platform sucks in social data, gauging the volume of posts about certain players and matches, then uses predictive analytics to estimate the potential interest in programming around them.

It's not just an experiment in social-data measurement, though. The idea is to determine how best to provision cloud storage resources. If social volume indicates heightened interest in a match, IBM allocates workloads in its power systems accordingly. According to IBM, the USTA's IT infrastructure must balloon 50 times its normal capacity to meet demand during the Open.

The IBM partnership "allows us to be able to scale and reach the amount of global fans that we have," said Ms. Jeter West. Remarking on the jam-packed two-week event, she added, "For us, there is no recovery time."