Despite the Chatter, Talk Is Still No. 1 Cellphone Feature | Ad Age
Skip to main content

Despite the Chatter, Talk Is Still No. 1 Cellphone Feature

Last month's column on how people want to use their phones sure raised some discussion. Some readers appeared rather up in arms with the suggestion that many folks just want to talk on their cellphones.

But the data are there: Almost half of poll respondents didn't identify any of a long list of possible cellphone applications as anything they want to use regularly. Still, by choosing to highlight this point, some readers felt that I wasn't looking into the future enough.

We know the younger age groups are more likely to text and use mobile video and other "advanced" data applications. And we know the iPhone is driving more users to watch online videos, go to the web, and check e-mail. So as the iPhone users grow in number, and as old folks are replaced by young adults, more nontalk functionality will inevitably grow in popularity.

But for now, talking on the cellphone trumps the other apps. 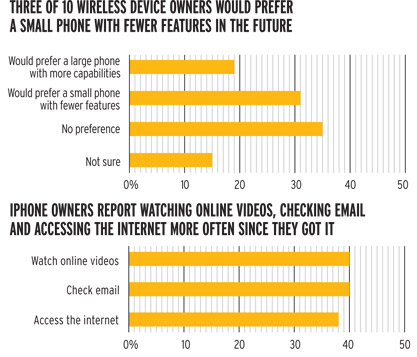