The "lonely" TV viewer is a rare thing indeed: Much of the time a TV viewer is kept company by his or her computer. In our recent survey of online Americans, two-thirds said they use a computer at the same time they watch TV, at least every now and then.

This is not a behavior isolated to the younger generation. Even the older male and female groups are at their computers more than 36% of the time they're watching TV. Women are a bit more likely to multitask with the TV-computer combo than men are.

Most of the time, folks are checking e-mail or browsing the web. The third-most-popular computer activity while watching TV is using social networks. Only 13% of the consumers said they look at content online related to the TV shows they are watching.

Clearly advertisers will have to take this major consumer behavior into consideration in marketing plans. It's further evidence of the requirement for cross-platform advertising, as well as the need to continue to work harder and harder on making TV ads pop through the clutter. 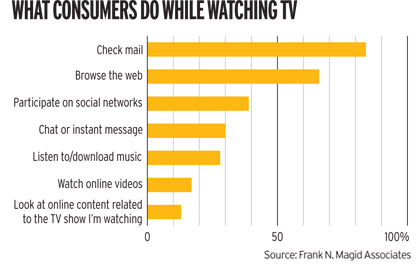