As Kindle Moves Beyond Books, Hope for Paid Content

Computer tablets, mini-laptops, e-readers -- at CES, everybody was talking about them. But, of course, the Kindle was one of the first to demonstrate that there was a market in the so-called third device, something that sits somewhere between a phone and a computer.

The Kindle has also helped demonstrate that there's a market in paid content on these devices -- and that has, not surprisingly, made it the talk among top newspaper executives and other print-media professionals.

When you take the small group of people that actually own a Kindle (2% of online Americans ages 12 to 64, according to a survey we conducted in April 2009), we find a broad range of material that consumers are interested in viewing on the device. While books, magazines and newspapers were high up on the list, I was surprised to see online videos were of interest, too.

No doubt, in 2010 we'll see more tablets and e-readers in the market then ever -- and more consumers tucking their tablets away in their coat pockets or purses. 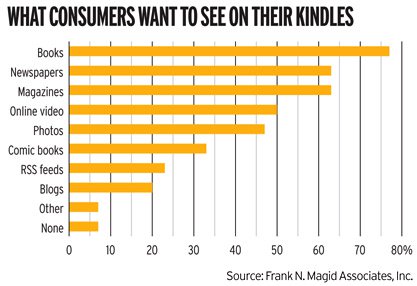