Media Cos.' Best Customers: Those Who Steal Their Content

Historically, an easy way to stoke the ire of a major media executive was to start talking about the surge in peer-to-peer file distribution.

Now, we do lots of research at Frank N. Magid Associates to take the pulse of various media channels for customers, and recently a P2P company, Vuze, hired us to find out how its users' media habits compare with those of the average internet user. When we did, we found that those media execs may not have cause for all the quaking. (While we conducted the study on behalf of a client, I assure you we used the same sound, time-tested methods we use for any of our in-house, proprietary research.)

We compared a random set of Vuze users with a national sample of internet users ages 18 to 44, and results revealed that users of P2P technology spend considerable money on traditional media and entertainment. They are, in fact, important and valued customers of the traditional media companies. Our survey shows that the P2P user attends 34% more movies in theaters, purchases 34% more DVDs and rents 24% more movies than the average internet user. The P2P user owns more HDTVs and is more likely to own a high-def-DVD player, too.

It's clear that it's not just about free content. P2P users are important to the revenue model of traditional media and entertainment companies. 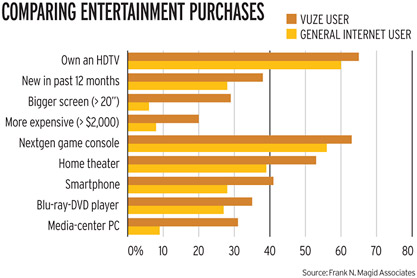