Online Video Popular Across Most Demographics

As if you needed me to tell you, video is a hot consumer web product.

While you might expect big differences in the types of content various age groups watch, that's not the case. The most popular genres on average are comedy, music videos and user-generated content. News is also popular across most groups.

But some groups overindex on particular content preferences. For instance, as you can see in the chart, 12- to 34-year-old males really love short-form comedy and user-generated content. Music videos are especially popular among women ages 12 to 34.

Some generalizations are intuitive: People ages 35 to 64 are the most regular consumers of news video, while sports content skews more male. Weather attracts older viewers, and TV shows are most popular with the younger populations. 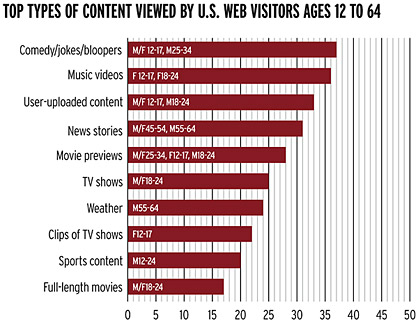