Would You Pay Money to See Your Favorite Site Ad-Free? | Ad Age
Skip to main content

Would You Pay Money to See Your Favorite Site Ad-Free?

Since the early days of the web, consumers have been complaining about banner ads, pop-ups, pop-unders and all sorts of advertising. We constantly hear from consumers and from those who design websites about how much consumers hate online ads -- they never click on them and would prefer ad-free sites.

But no, consumers do not feel that way -- at least very few of them do. When we asked consumers if they would pay $39.99 a year, which comes out to less than $4 a month, for an ad-free version of one of their favorite sites, only 2.4% said definitely yes, they would be likely to do so. And only 3.5% said they'd be very likely. In fact, 84% of the people said they'd be unlikely or not at all likely.

At the lower price of $29.99 a year, or less than $3 a month, only another 1.9% of consumers said they would be very likely to pay for an ad-free version.

What does this tell me? Consumers might "hate ads," but not enough to pay even as little as a few cents a day to avoid them. 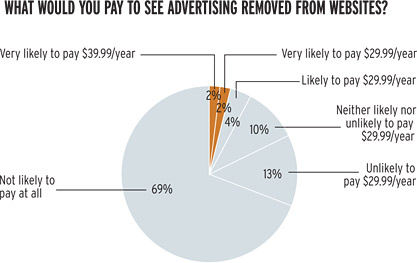