As has been widely reported, social-networking sites are visited monthly by more than 100 million consumers, and billions of page views are recorded on these sites.

Perhaps not surprisingly, 12- to 24-year-olds are more likely to report social network use as taking away from the time they spend watching TV. While this might seem like bad news for networks, as advertisers trying to reach this group may increasingly turn their attention from traditional media to social networks, it also represents an opportunity to tie the two together. For example, companies such as CBS are integrating community features into their online video players, and Joost is counting on social-networking strategies, such as tapping into Facebook for some social video-sharing tools. 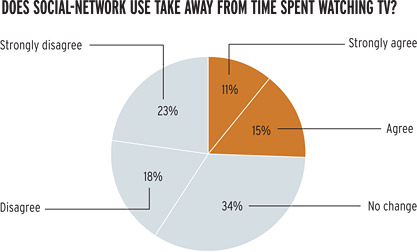