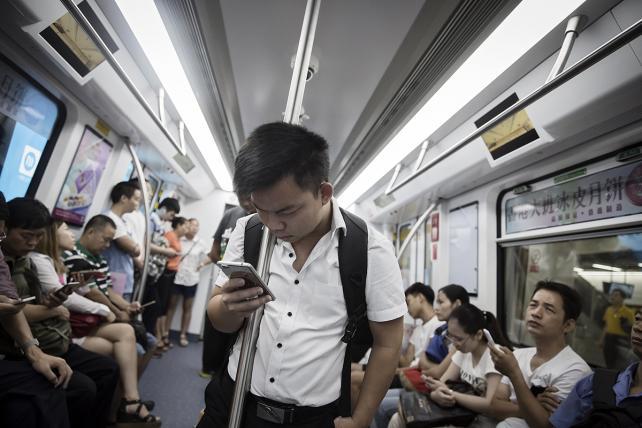 A passenger looks at a smartphone on a subway train in Shenzhen, China, on Tuesday, Aug. 23, 2016.
Credit: Qilai Shen/Bloomberg

In China, the world's second-largest ad market, a whopping 57% of ad expenditure will go toward the internet this year, according to GroupM. But the new report also says China's super-fast growth in digital spend is losing some steam, as almost everyone in urban areas now has digital access and the era of massive numbers of new users rushing online is coming to an end.

For years, the explosion of internet adoption in China has helped power growth in digital advertising. The country had 731 million internet users at the end of last year, more than half of China's population, according to official Chinese figures. That's a huge number, more than twice the entire population of the United States.

About 57.2% of ad spend in China will go toward the internet this year, compared to 19.4% five years ago, underscoring just how fast China's online ecosystem has developed. China's digital share is much higher than the average and is second only to Sweden, which devoted 59.6% of its expenditure to digital outlets. Globally, GroupM expects digital to account for a third of overall ad spending this year. In the U.S., the largest global ad market, digital spend is forecast to be 30.9% of the market this year.

As China has gone online, embracing e-commerce, online video and all-purpose app WeChat, digital advertising exploded; for example, in 2012 online ad spend was growing 46.8% year over year. Growth is still solid, but it is no longer as dramatic, and digital spend is expected to expand 21.5% in 2017.

"China's online population is 30 times larger today than it was in 2000," GroupM's "This Year, Next Year" forecast for China said. "But internet penetration rates in urban areas are near saturation and little growth can be expected from an influx of new internet users."

Mobile is still going strong. In smartphone-addicted China, mobile internet will "become the main engine propelling internet advertising spending in the future," the report says. About 95% of Chinese internet users went online through mobile devices at the end of 2016, according to official data from China's government.

Overall, TV is set to make up 31.4% of spending. But as China embraced smartphones and the internet, traditional TV advertising struggled to adjust. Advertising expenditure on traditional TV will drop by 5.2% this year, after dipping an estimated 4.9% in 2016, though there's growth in content marketing and product placements.

China's state-run broadcaster, China Central Television or CCTV, is bucking the trend. Ad spend on CCTV channels is expected to be up 5% in 2017, after growing 5.3% last year. CCTV got a boost from two big sports events last year, the 2016 Summer Olympics and the UEFA Euro 2016 soccer tournament, and is improving its variety show offerings, GroupM said. There has also been an attitude adjustment in the advertising management style at the Chinese state TV behemoth; the report says "it is no longer approaching advertising as a cash cow for CCTV, but sees it as a service to help clients build brands."