What Accountants Can Teach You About Using Social Media

H&R Block Cast a Wide Net With a Campaign That Included Profiles, Videos, Twitter and Widgets
READ THIS NEXT
Amazon's TikTok ban was a false alarm, capping off a whirlwind week of suspicion towards China-backed app
Amy Worley
Credit: Jonathan Fickies

NEW YORK (AdAge.com) -- Tax software isn't the first thing that comes to mind when you think of marketing in social networks or on YouTube, spaces dominated by movie trailers and goofy viral videos. But H&R Block proved that it, too, can be successful in the space, but it's about matching content to the social community and then making that content valuable to consumers, said Amy Worley, director of digital marketing for H&R Block. 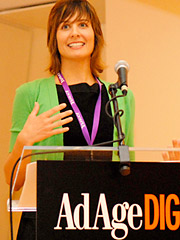 Most companies, she noted, wouldn't dive into all the tactics at once but her product is very seasonal and "anything we didn't learn in one season, we would have to wait until next year [to try]."

The recent social-media blitz to market H&R Block's digital tax solution produced a 171% lift in internet ad awareness among the targeted audience and an overall brand awareness lift of 52%. H&R Block devoted about 0.5%* of its total marketing budget to the effort.

Her presentation preceded a panel of digital-marketing pros who addressed the challenges and opportunities in the space. Said panelist Sean Howard, director of strategy and innovation, Lift Communications, and author of the blog Craphammer.ca: Asking whether brands should embrace social media is "like asking should a brand engage in digital -- and I hope we're beyond that."

Here are seven takeaways from the event.

Be entertaining
Before creating content for any of these channels, it was important to determine the tone. So on sites such as MySpace and YouTube, where people go to be entertained, the message was crafted to do just that using the character Truman Greene, a dorky, overeager troubadour who sings about how to save money and evangelizes H&R Block.

"What you put out there has to be valuable and right for your brand," Ms. Worley said.

Be useful
Brands shouldn't be looking at social media as just another place to stick traditional ads, said Conn Fishburn, the director of social-media strategy for Yahoo. Instead, marketing should use social media as way to research consumers and "involve brands in natural human experiences."

H&R Block used entertainment as its ticket into social-networking sites and YouTube; brands can also focus on creating things that are useful to the community.

"Everything comes back to creating something of utility," said Tom Arrix, VP sales-East, for Facebook. Other brands have wrapped their social-media efforts around causes, such as Chase's "+1" efforts on Facebook.

Advertising is a tricky, but sometimes necessary, tactic
Traditional advertising in social media is "both necessary and risky," said Ms. Worley. She said it's sometimes needed to give an initial push to content. For instance, H&R Block ran ads on YouTube publicizing a Truman Greene video. But putting ads in social media makes you more susceptible to criticism from consumers because it doesn't fit there, she said, noting that she employs something called the YouTube Test: If an ad on the YouTube home page isn't a movie trailer or something otherwise entertaining, there will be lots of negative comments.

Try personas to spice up a MySpace page
Truman Greene's videos on YouTube were advertising, but viewers appreciated it because it was funny. H&R Block showed 16 videos of him in four weeks. Ms. Worley said she decided to extend the character to host the company's MySpace page, because H&R Block found that social-networking profiles work best when the sponsor page is a persona instead of a company. Another good example, she pointed out, is Travelocity's Roaming Gnome MySpace page.

Use Twitter for more personal interactions with customers
H&R Block took a different tone with Twitter, where consumers are looking for an often more serious interaction with the brand, Ms. Worley said. To wit: Eighty-five percent to 90% of the "tweets" were one-to-one. On the microblogging site, Ms. Worley personally monitors questions and comments about the company and replies to users with answers. "It's a great way to have a real, authentic, one-to-one conversation with people," she said. But, she warns, "responsiveness is very important."

It's OK to veer from 'the big idea'
Once brands embrace social media, agencies also have to change some of their fundamental processes when it comes to creating and distributing content, said Kelly Mooney, president and chief experience officer of Resource Interactive. For example, in social media there isn't just one big idea. As evident in the H&R Block case study, sometimes social media is about stacking up many small ideas to create a big total impact.

Of those small ideas, certain things worked better than others. Polls on social-networking sites are "simple but popular," Ms. Worley said, whereas a Magic 8 Ball-like application was the least valuable of the elements because it had relatively little value for consumers. "If it's not valuable for them, it's probably not worth doing," she said.

Corral the agencies
Perhaps one of the biggest logistical challenges: Agencies also have to abandon some of their traditional silos, with media, creative and the client working together to craft a social media experience.

"You have to rip up the business card and try to solve the problem," said Art Sindlinger, VP-activation director at Publicis' StarcomUSA.

H&R Block used four agencies in total to complete its social media efforts because it was hard to find one that could do it all, said Ms. Worley. But, she added, all the direct communication came from the client.

~ ~ ~
CORRECTION: An earlier version of this said the social-media blitz accounted for 5% of H&R's total media budget. In fact, the effort represents 0.5% of its total outlay but 5% of H&R Block Digital Tax Solutions budget.

Megan Mcilroy
View all articles by this author