Samsung shut down a portion of New York's Times Square last Wednesday for its latest product launch. But unlike its other high-profile unveilings, the attention was focused on a "smartwatch" instead of a smartphone. 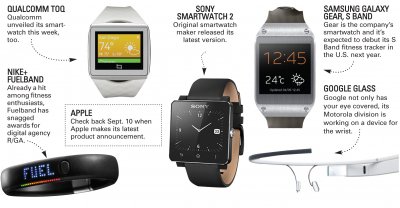 The Galaxy Gear, a mobile device that pairs with a smartphone and is worn on the wrist, is part of the latest in a trend sweeping the mobile-device industry at large: Tech companies are betting on wearable computers ("wearables") to become the next major consumer category as interest in smartphones wane.

"We see the body as the next frontier for personal computing and the wrist is one of the most-accepted places on the body for consumers to wear a sensor device," Forrester analyst Sara Rotman Epps wrote in an email.

To date, the most successful name in wearable computing has been the crowd-funded Pebble, a company that's sold nearly 200,000 smartwatch units despite spending just $6,000 on marketing. Approximately half of those were sold last summer during Pebble's record-setting Kickstarter campaign.

Now five of Ad Age DataCenter's top 100 advertisers -- Apple, Google, Nike, Samsung and Sony -- are developing or selling wearables, as is emerging marketing force Qualcomm. Investment bank Piper Jaffray projects the market for wearables to explode to $18 billion in 2016 from $1 billion in 2012.

Piper Jaffray analyst Douglas Clinton has gone so far as to say that wearables could possibly replace smartphones in terms of prominence -- and, in turn, marketing spending. "Obviously, mobile is a trend that's undeniable at this point and if you think about what's the next smartphone in the next five or 10 years, it's likely something that's a wearable technology," Mr. Clinton said. "They're going to replace things like the smartphone, because they're easier [to use] and more integrated with your body."

Even with smartphone growth slowing, it remains to be seen if there's enough demand for wearables to justify six of the world's most-notable consumer-tech brands entering the market almost simultaneously. Thus far, the wearables market has been mostly limited to tech-savvy early adopters and "biohackers," people who obsessively track their diets and exercise regimens. If wearable technology, whether on consumers' wrists, faces or shirts, is to become the consumer category it's projected to be, tech companies will have to design and market it as literally fashionable.

"If [a wearable] is unobtrusive, the barrier to adoption is low. If it is obtrusive, it's insurmountably high," according to Ian Schafer, CEO of digital agency Deep Focus and a Google Glass owner. "People give a look of suspicion when they see someone wearing [Glass], but when they put it on, it's awe."

Expect tech companies to spend heavily on marketing to overcome that stigma.