South Korean Shop Gets Digital Cred as It Expands U.S. Presence
READ THIS NEXT
What the TikTok ban means for brands

NEW YORK (AdAge.com) -- A digital darling for the past five years, Barbarian Group will become part of South Korean ad network Cheil Worldwide in a deal that has Cheil taking a majority stake in the boutique agency.

The deal, which was first reported as being done last month -- and denied by Barbarian -- opens up a new chapter in both companies' stories. Terms were not disclosed.

Right time for deals
Cheil acquires a major digital innovator and a respected creative shop, which helps legitimize its push as a global player. Wooing Barbarian, which other holding companies had also looked at, is the latest in a string of pickups for the company, including the recent addition of Beattie McGuinness Bungay in the U.K. and New York.

"My Cheil colleagues and I very much value The Barbarian Group's brand," said Michael Kim, president of Cheil North America. "The founders built this great brand through exciting achievements in creativity, innovation and strong digital technology, and we're excited to add all of that to the Cheil network."

Meanwhile, Barbarian Group is painting the deal as a way to continue its eight-year rise, though within the framework of a holding company hungry for innovation andt without the acquisition baggage of a larger company such as WPP or Omnicom Group. Additionally, the deal makes global reach easier for Barbarian Group, with Cheil's 31-office, 25-country infrastructure for support. 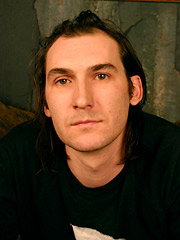 Benjamin Palmer
Credit:
Erin Caruso
Barbarian Group CEO Benjamin Palmer said there are two benefits of the deal: It would give Barbarian the ability to expand in size and location and give it more security in its future during a time of major industry flux. "It's exactly time for us to make a big, new move," said Mr. Palmer, one of three founding partners that remain at the company. "In some ways, that's growing in size and location, and in some ways it's becoming more capable at handling the great unknown of the future."

He called Cheil "untapped" and said he liked its formula for partnership: "They have a whole bunch of agencies that are just like you, that they compare you to, or you compete against. What we were looking for was a global partner with some infrastructure and some financial backing that could help us grow but wasn't going to put us in a mold of the past."

Subservient Chicken
Barbarian blew onto the ad scene in April 2004 when it created one of the earliest brand-sponsored viral phenomena -- the then-groundbreaking "Subservient Chicken" website for Burger King, on behalf of Crispin Porter & Bogusky. The project left an indelible mark on Barbarian as innovators and helped shape its culture; Mr. Palmer still has the chicken doll on a shelf in his Victorian-themed windowless office.

Since then, the company has had a mix of largely project-based work for General Electric, CNN, Comcast and Virgin America and others either directly serving the advertiser or as a production partner to agencies. It has also handled more esoteric digital work, such as installation-based projects veering toward art, and a software project it sold to Apple that uses it as an iTunes visualizer. But like many small digital shops with production-oriented bases, Barbarian Group suffered in the last year, laying off 15% of its staff this summer.

An initial blog post reporting rumors of the sale pegged the deal at $10 million (Barbarian denied this at the time), but according to an industry executive familiar with Barbarian's business, a likely total price tag for a deal like this could run closer to $20 million. Barbarian's revenue has fluctuated between $9 million and $13 million, but it had yet to be routinely profitable, which drove away at least one interested suitor in the past. In this deal, AdMedia Partners represented Cheil.

'Not my retirement plan'
While the deal's terms weren't disclosed, Mr. Palmer said they include a scheme to keep the founders around longer than the standard acquisition earn-out agreement. "I'm 35. This [deal] is not my retirement plan," he said. "There's money, it's a good deal for us, but it's very much structured for growth versus flipping the company in a fixed couple of years and walking away. That's not the track we're on."

Barbarian Group's headquarters will shift from Boston to New York, which is largely ceremonial, as the principals and financials have been based in as SoHo office for the past few years. (Chief Operating Officer Rick Webb and Executive Creative Director Keith Butters are the other founders, and both are based in New York.)

Mr. Palmer stresses the Boston office will remain an important hub using the talent already in place as well as recruiting new blood from the city's strong base of technology-oriented graduates, and said Cheil's investments in software, hardware and R&D will offer Barbarian Group a "lot of opportunities to do installation work, R&D work."

Investing in digital companies is a key part of Cheil's future strategy; in September, it acquired a top digital agency in China called Open Tide Greater China. "This year, CEO Nack-Hoi Kim Kim is really pushing the digital marketing in Asia and globally. A couple months ago, we put a lot of resources on a very large-scale exhibition held at our Cheil headquarters, taking up an entire floor, showing the latest and most cutting-edge digital marketing initiatives. Basically, this is the future of marketing in Korea, and hopefully the rest of the world will follow," said a Cheil spokesperson in Seoul.

Cheil Worldwide is currently ranked by Advertising Age as the world's 16th-largest advertising firm (based on 2008 figures). It started as Samsung's in-house agency but today Samsung owns about 20% of Cheil Worldwide. The rest is owned by Cheil itself and shareholders. Samsung is still Cheil's largest client, but not its only client. Cheil has a handful of other global clients and more than a dozen non-Samsung accounts in Korea such as oil refiner S-Oil, Hankook Tire, leading Korean integrated wired/wireless telecommunication service provider KT and Dong Suh Food. Non-Samsung business it has outside Korea (and won this year) include Orion (Russia), WoongJin (China), Maeil Dairies (Vietnam) and KT&G (Russia) and the Korea Tourism Organization (global).

Suitors for Barbarian Group have included most major holding companies, and many observers thought Dentsu would be a natural fit for the company. "We have talked to agencies in Asia before; nothing really clicked," Mr. Palmer said. "This is not about us doing Korean work, though, this is part of their plan to invest in America. But the opportunity for us is that we can go outside of America." He noted none of the founders have yet visited South Korea, but, "culturally, I think they're the indie rock version of Japan."

"It's new adventure time, that's the main thing," Mr. Palmer said. "It's not us cashing out, it's us getting a boost towards the future. We're a young bunch of people; we want to kick more ass."