Airbnb Chief Marketing Officer Amy Curtis-McIntyre admits to drinking the company Kool-Aid. On an almost weekly basis during business trips to places like New York and Los Angeles, she's a guest of the service. 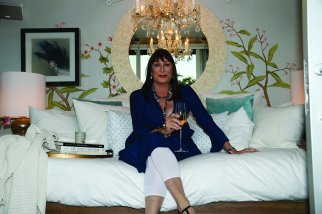 Anjelica Huston, along with Moby and other stars, designed prefab pop-up rooms for Airbnb.

"When you work at this company, you very much live the brand," said Ms. Curtis-McIntyre, who joined Airbnb in March and is charged with making it a household name.

A service that lets travelers book accommodations in the homes of local residents for short-term stays, 5-year-old Airbnb is on an impressive growth trajectory. While the privately held San Francisco-based company won't disclose its revenue -- which it earns charging 6% to 12% fees on bookings and 3% of what people make from renting out their homes -- it's reporting a surge in users. It says 4.5 million guests have used Airbnb this year, compared with 4 million who had used it until January 2013.

From a demographic standpoint, guests who use the global service skew young, single, educated and affluent, Ms. Curtis-McIntyre said. Her mandate also includes connecting with potential hosts, whose characteristics have been less predictable. Older couples and empty nesters are plentiful among them, which suggests "the host piece is much more attitudinal than it is demographic," she said.

Ms. Curtis-McIntyre has relevant experience in hospitality and travel. She was the founding CMO of JetBlue and head of brand marketing for Hyatt. Her most recent full-time job -- prior to the year she took off to travel five continents with her husband and two sons -- was as Old Navy's CMO.

World Cup push
But while the business of hospitality is the business of Airbnb in many respects -- like the managing of inventory and targeting of travelers -- she views it as uncharted ground. "We've invented a category," she said. "It's not just about the places. It's about creating a desirable travel experience."

Ms. Curtis-McIntyre has a team of roughly 20 reporting to her in functions like events, strategy and insights, advertising, partnerships and content. She's in the midst of shaping a full marketing strategy for 2014, which will include an awareness campaign in Brazil with a focus on the World Cup. Messaging will focus on Brazilians who plan to travel among -- or could potentially be a host in -- the 12 cities where games will be played.

She also has plans for a marketing ramp-up before the end of the year. Working with its new agency of record, Pereira & O'Dell, Airbnb is making two "short films" that could air as TV ads -- one is designed to be artful, in the vein of a Mullen-created video comprising user-submitted Vines that aired on Sundance last month, while the other will be more "commercial" and explanatory, according to Ms. Curtis-McIntyre. The latter will be produced in at least four languages.

"It's old-fashioned awareness," said Ms. Curtis-McIntyre, who added that Airbnb intends to make more of a push in Asia and South America next year. "When people learn about us and try us, they tend to fall in love with us."

While the service is increasingly popular, Airbnb has its share of legal challenges that could stunt its growth.

Airbnb rentals are often prohibited by local law. New York City, for example, has become a legal petri dish illustrating how the company's wrangling with local agencies and policymakers is likely to be a continuing battle. Airbnb scored a victory late last month, winning an appeal on behalf of a host who had been fined $2,400 for operating an illegal hotel. But the appeal was granted on the basis that the host's roommate was in the apartment at the time of the rental, so the ruling doesn't represent full acceptance of the company's business model.

Education role
Ms. Curtis-McIntyre said that public policy is not in her domain and that Airbnb has a government-relations team to contend with legal issues. However, price gouging by hosts during high-demand events is one Airbnb business problem that marketing can potentially address. While she didn't go into detail, she said there's an education role for Airbnb to play in the case of an event like the World Cup, where local residents have an opportunity to make significant money. Hosts "would be crazy not to take advantage of this influx of traffic, but do it in a way that isn't greedy," she said.

Ms. Curtis-McIntyre herself intends to use Airbnb for upcoming business trips to Rio de Janeiro and Sao Paulo, as well as visits to the company's new European headquarters in Dublin. She hasn't yet been a host, citing her busy household, but she says she's primed to.

She said that it's been important to participate in the so-called sharing economy -- marketplaces for people who aren't always licensed professionals to sell their goods and services -- and being steeped in it at work has been critical in her new job.

"The [company's] culture is the biggest educator for me," Ms. Curtis-McIntyre said. "It's very easy to start to believe that this is a better way to live."