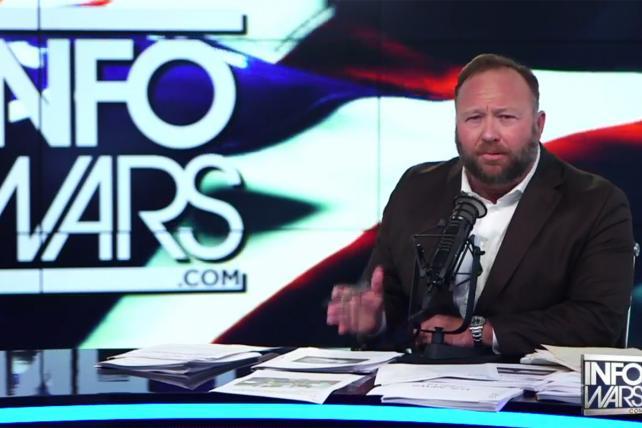 Alex Jones is appearing in new video on Facebook despite a 30-day ban for posting offensive videos.

Facebook says it removed at least four videos from Jones's channel because they violated its policies, a move that echoed action taken against him by YouTube earlier this week. Facebook's punishment temporarily stripped Jones of being able to manage his pages on Facebook—a monthlong timeout from administrative privileges.

But Jones' InfoWars program was able to keep running on Facebook on Friday, because while his personal access to Facebook was restricted, other managers could operate his pages, including posting livestreams of his show.

Facebook did not say what videos it removed. It did say that one of them was flagged a month ago but remained up because Facebook made an incorrect evaluation.

"Our Community Standards make it clear that we prohibit content that encourages physical harm [bullying], or attacks someone based on their religious affiliation or gender identity [hate speech]," a Facebook spokeswoman said in an e-mail statement. "We remove content that violates our standards as soon as we're aware of it."

Facebook appears to be running out of patience with Jones, who is affiliated with a few pages on the social network. The social network is watching his pages in light of a number of community violations, presenting the potential for his pages to be taken down entirely, according to one person familiar with Facebook policies.

Facebook removes pages when they reach a certain number of violations, but the company has not said exactly how many would warrant the ultimate punishment.

Earlier this week, YouTube issued a strike against Jones' channel, a warning that came with a penalty that prevents his channel from livestreaming for 90 days, though he can still post pre-recorded videos. YouTube bans a channel after three violations in a 90-day period.

But YouTube has been playing a game of Whac-A-Mole with Jones, because his show keeps popping up on illicit livestreams on channels affiliated with InfoWars. YouTube takes them down if they are reported, and new ones appear to keep popping up.

On Friday afternoon, the conspiracy-spinner was live-streaming across multiple social media platforms, in fact: His InfoWars program was broadcasting on his Facebook channel, on Amazon's Twitch and on illicit YouTube streams.

Jones has been going after the platforms for days, since they started considering penalizing his program over his incendiary videos.

"YouTube and Facebook have committed to censoring Alex Jones and InfoWars live broadcasts on their platforms," Jones wrote on one of his Facebook videos on Thursday.

Jones is a lightning rod for spreading lies like the claim that Sandy Hook school shooting victims' family members were "crisis actors," and for calling Michelle Obama a derogatory word for transgender people.

Jones is at the heart of one of social media's most pressing problems -- how to penalize fake news and hate speech while allowing for the fullest freedom of expression. What crosses the line? 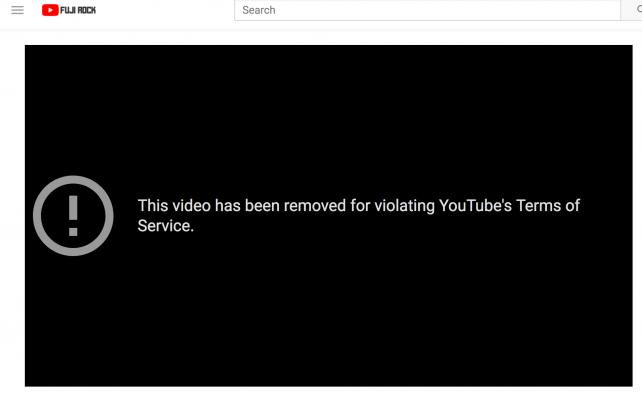 YouTube took down one illicit Alex Jones stream on Friday, but there were more popping up.

Jones and his acolytes appear to be loving the moment, playing up the idea that they're being persecuted.

"The fight for freedom of speech is at a climax," said a disclaimer on one of the YouTube accounts, under the name Jacob Baker, streaming InfoWars on Friday. "Alex Jones has had his live streaming ability cut off .... Now is the time to take back our Republic, now is the time to fight for your freedom!"

Jones also was streaming on at least one channel on Twitch, the streaming service that is owned by Amazon. That stream, which was hosted by one of Jones' associates, was removed in the middle of the broadcast. Twitch would not comment on Jones or the associate's accounts and whether it has been fielding any complaints over Jones.