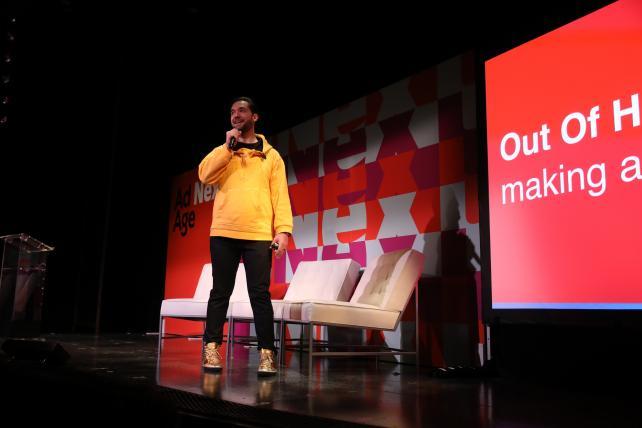 Alexis Ohanian is perhaps best known for co-founding Reddit, which is the third-most popular website in the U.S. and ranks ahead of other popular destinations such as Amazon. He's also known as the guy who married tennis superstar Serena Williams. (Reddit's other co-founder, Steve Huffman, remarks about this development: "As his college buddy who knew him when he had a literal neckbeard, I continue to be amused by the whole situation.")

Fewer people know Initialized Capital, a venture capital outfit Ohanian co-founded that has investments in platforms such as Instacart, Coinbase and Cruise -- the last of which is a self-driving tech startup that was acquired by General Motors for a cool $1 billion.

In his appearance at the Ad Age Next Conference, Ohanian ran the gamut across a number of subjects. Here, a few witty observations from his talk.

"Many of you have never screenshotted a banner ad and posted it on Instagram," Ohanian said. "That takes a special kind of person."

The comment was in regards to AdQuick, a technology company that has streamlined how marketers buy both digital and traditional out-of-home billboards. The current state of buying out-of-home is a cumbersome, lengthy process. And most marketers buy OOH inventory in areas they know -- their own backyard, for example.

Ohanian showed off a billboard that featured an image of his wife with the letters "GMOAT" – Greatest Mother of All Time – purchased using AdQuick software, adding that it was something he knew she would see during her commute. "I just logged onto a website and uploaded some artwork and it happened," he said. "The ROI for that was significant because it was shared far and wide."

"Out-of-home is making a comeback and direct-to-consumer brands are making things that don't go suck and simply go viral," he added.

On the retail experience

"Your competition is the Amazon Essential that is going to make a delivery in 12 hour via drone and be cheaper [than the competition]," Ohanian said. "Retail is changing drastically fast. Foot traffic is getting smaller and smaller."

To that end, Ohanian said brick-and-mortar retailers must start thinking about the "Instagram and Snapchat effect," or stores that cater to delivering an experience that can also be shared on social media. He gave examples of stores that allow people to skip the cash register so they can "shoplift and walk out," he joked, while still being charged for the products they picked up. Another example he cited: Companies that feature Instagramable backdrops for photos to be shared on social media. "Retail is now all about the experience," he said.

"People take amazing photos of their coffee using world-class Instagram software and then go work and use garbage software," Ohanian said. "Every business must be in the software business."

To hear Ohanian tell it, many businesses have software problems, but can't hire the engineers to remedy those issues because there simply aren't enough of them.

His solution: work with startups, many of which are hungry and have talented engineers that can help a brand adapt from legacy tech to first-class software.