Top Chinese ad sellers, search company Baidu and e-commerce firm Alibaba, have overtaken most of their American counterparts and are catching up to Google and Facebook.

Baidu is expected to take in 4.68% of the $146 billion marketers will spend on digital advertising this year, according to new estimates from eMarketer. The research firm projected that Alibaba will trail close behind at 4.66% of the money advertisers around the world will put toward desktop and mobile ads in 2014 after subtracting so-called traffic-acquisition costs, or the amount of money a publisher pays to drive traffic towards the pages displaying those ads.

While this year marks the first time eMarketer has reported estimates of Baidu's and Alibaba's share of global net digital ad revenue, it's not the first time either company claimed a bigger share than most U.S. companies. Last year Baidu and Alibaba also ranked third and fourth, respectively behind Google and Facebook. 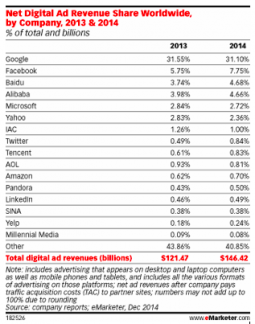 Google once again retained the biggest share of global digital ad revenue and by a large margin. The company claimed a 31.10% share this year -- a slight dip from its share last year -- while runner-up Facebook secured 7.75%. And even though Facebook's share is only a few percentage points higher than Baidu's or Alibaba's, the social network's share grew at a higher rate from 2013 to 2014 than either Chinese company.

For all the attention paid to the ad businesses of Twitter, Amazon, Pandora and LinkedIn, none of the four companies is expected to account for more than 1% of the overall global ad market this year. Twitter may cross the mark in 2015 if its steep growth continues. The social network's market share increased by 71% year-over-year, the most of any of the 16 companies eMarketer listed. Amazon, Pandora and LinkedIn each saw incremental gains. 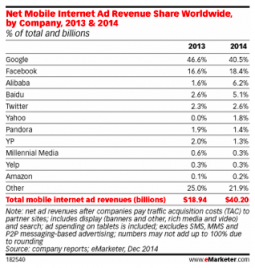 Prospects for Twitter and Yahoo are rosier as global ad spending shifts to mobile. EMarketer projected the social network to take in 2.6% of worldwide mobile ad revenue this year and the portal to take in 1.8%.

The $40.2 billion mobile ad market, like the overall ad market, continues to be firmly in Google's grasp, though that hold has begun to loosen. Google's share of mobile ad revenue will tumble from 46.6% in 2013 to 40.5% in 2014, per eMarketer. The search giant's market share is slipping as Facebook's business and the Chinese market transition to the smaller screens.

Facebook will seize 18.4% of the mobile ad market in 2014, two years after the social network sold its first mobile ad and pivoted into a mobile-first company. And Alibaba and Baidu will ride China's rise as second-largest mobile ad market to grow their market shares by 288% and 96% year-over-year, respectively. Alibaba will leapfrog Baidu to capture 6.2% of the market while Baidu takes 5.1%.