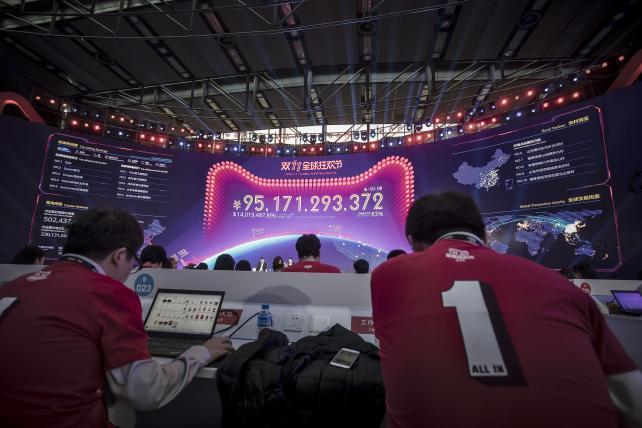 Alibaba Group Holding is looking beyond borders to turn its annual Singles' Day shopping celebration into a global phenomenon.

This Sunday, the Chinese internet giant is including sales from Lazada, the online shopping mall it controls. Southeast Asia' biggest web retailer is becoming a key part of Alibaba's plan to fuel growth, on top of the company's efforts to move into shopping malls, convenience stores and food delivery.

The challenge for billionaire Jack Ma's online empire is to break another sales transaction record after a decade of exceeding prior results. With a brewing trade war, a cooling economy and rising competition from smaller platforms such as JD.com and Pinduoduo, Alibaba is seeking to add new growth engines. The retail celebration on Nov. 11 dedicated to the nation's unattached has become an important bellwether not just for the company, but also the world's No. 2 economy.

Alibaba President Michael Evans said he was "not too concerned" about the U.S.-China trade fracas dampening Singles' Day sales. "11/11 is not an event that relies exclusively on any one market," Evans told Bloomberg TV in an interview Friday. "We will be working with over 200 countries and regions as part of this enormous event and so we don't expect any one area to have a huge amount of influence, other than China of course."

On the Chinese economy, Evans said there's "some uncertainty about what will happen going forward," while noting growth in the country is still running at about 6.5 percent a year.

Alibaba has seen softer demand for big-ticket items, such as washing machines, televisions and automobiles, Evans said. But other sectors, like cosmetics, food, fashion and apparel, are still seeing strong growth. The company is focusing on the 300 million Chinese people who are expected to enter the ranks of the middle class over the next five years, Evans said.

"Singles' Day has now become a stage for Alibaba to showcase its capabilities across all its platforms," Daniel Zhang, chief executive officer, said at an October news conference in Beijing. He's taking over after Ma steps down as executive chairman next year.

It was Zhang who came up with the idea of turning Singles' Day into a shopfest a decade ago. Now that this year's one-day bazaar will be Ma's last as chairman, Zhang will need to prove he can carry on the legacy. "We think 1 billion packages will become a daily event in the future," he said.

More than half a billion people are projected to visit Alibaba's websites in search of Dyson hair dyers, infant formula and Gucci bags. Alibaba has been able to post breakneck growth for almost a decade, including a 39 percent jump in sales last year to 168 billion yuan ($24.2 billion).

Still, there's some uncertainty this year, due to a slowing economy, real estate deflation and trade tensions with the U.S. that could impact on Chinese consumption. The weaker economy and rising household debt have, to some extent, dampened consumers' confidence in China.

Online retail sales growth slowed to 24 percent, down 12 percentage points in the second quarter, according to the National Bureau of Statistics. Policy makers have made a slew of changes, including reductions in income tax and tariffs on goods. That indicates spending may pick up in coming months; the earliest proof could come from data during Singles' Day.

Last week, Alibaba reported quarterly profit and sales well above analysts' estimates, while trimming its prediction for full-year sales by as much as 6 percent, with Ma warning that the economic conflict between the world's two largest economies could last 20 years.

To fuel growth, Alibaba is expanding its playbook. Ele.me, the startup it took control of this year, will provide delivery services for select Starbucks stores across 11 cities in China. Rural Taobao will offer coupons for goods across 800 counties, and Lazada will roll out promotions across six Southeast Asian countries including Indonesia, Malaysia and Thailand.

Although it's been three years since Ma said he wants to make Singles' Day a global shopping event, that hasn't happened yet. International expansion will be a key part of Zhang's plan to keep breaking sales records. Last year, Russia, Hong Kong and the U.S. were the top three regions outside of mainland China to buy goods during the annual event. Popular items purchased overseas included mobile phones, wool coats and knitted sweaters, according to the company.

At the same time, Alibaba's efforts to push into the U.S. are sputtering. It discarded a pledge to create a million jobs in the country, lost its top U.S. dealmaker and jettisoned plans for affiliate Alipay to acquire MoneyGram. U.S. President Donald Trump said in October that he plans to withdraw from a 192-nation treaty that gives Chinese companies discounted shipping rates for small packages sent to American consumers, making it harder to push into the market.

Southeast Asia will give the clearest indication of Alibaba's ability to go international. With Singapore-based Lazada now fully under its wing, the region remains one of the company's relative bright spots.

The slump in China's advertising sector is also hurting Alibaba. A significant chunk of revenue comes from merchants spending money across the e-commerce giant's platforms to lure customers. That item, which falls under the category "customer management revenue," rose 26 percent in the latest quarter, compared with 35 percent in the prior period.

"The macro slowdown has affected advertisers' sales performances and thus their online ad spending budgets," Ella Ji, an analyst at China Renaissance, wrote in a report.