Outside the Amazon CEO’s building, protesters chant “Bezos, Bezos, you can’t hide, we can see your greedy side”
READ THIS NEXT
What 'scared' brands need to know about Facebook and Instagram's election ad changes 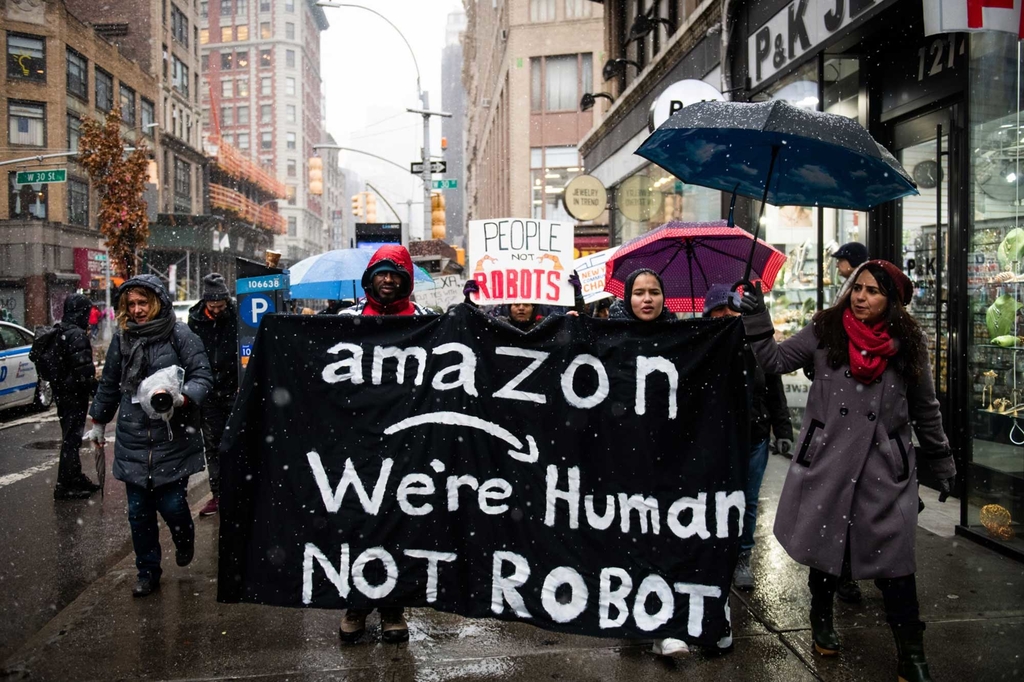 The optics war between Amazon and its critics is intensifying on Cyber Monday with labor, environmental and digital privacy groups staging events around the globe to amplify their concerns about the world’s biggest online retailer.

At a first-ever Amazon Symposium in Brussels, activists discussed such issues as worker rights, antitrust laws and climate change. In a snowy New York, more than three dozen demonstrators rallied outside the Manhattan penthouse of Amazon CEO Jeff Bezos. A group in San Bernardino plans to protest in the evening near an Amazon warehouse in the Inland Empire, a key logistics hub serving southern California.

At the rally outside Bezos’ building, the protesters chanted “We’re cold, we’re wet and we’re holding Amazon in check” and “Bezos, Bezos, you can’t hide, we can see your greedy side.”

The coordinated efforts seek to steer attention from the big Cyber Monday discounts Amazon is offering on voice-activated speakers and Nerf dart guns to issues like warehouse worker deaths and injuries, the environmental costs of fast delivery and the increasing amount of information tech companies gather about customers.

High-profile politicians like President Donald Trump and Democratic presidential candidates Bernie Sanders and Elizabeth Warren have all publicly criticized Amazon, making it a prime target for activist groups eager to spread their messages, says Margaret O’Mara, a history professor at the University of Washington.

“Surging protests reflect in part the politics of the moment and the heightened political visibility of Amazon on many fronts,” she says. “For labor and social justice activists, it has become a potent symbol of what has gone wrong with modern capitalism.”

About 100 picketers marched in front of a driveway at an Amazon shipping hub in San Bernardino, blocking trucks, per Mario Vasquez, spokesman for Teamsters Local 1932 in California’s Inland Empire. The group expects 200 protesters at a demonstration Monday night, where participants will voice concerns about Amazon’s growing presence in the region and what it means for workers and air pollution, he says.

Amazon has plowed through similar protests in previous years with minimal disruptions—U.S. consumers are expected to spend a record $9.4 billion on Cyber Monday, according to Adobe. And the company remains mostly popular with consumers.

Social media sentiment around Amazon and Cyber Monday was overwhelmingly positive, with 95 percent of mentions deemed positive and 5 percent negative, according Brandwatch, which monitored 90,000 mentions of “Cyber Monday” and “Amazon” on social media platforms like Twitter and Facebook and forums like Reddit in the seven-day period of Nov. 23 to Dec. 2.

The big change this year is the coordination between disparate groups. A key development for Amazon critics was the announcement last week of a newly formed organization called Athena, which brings together dozens of groups and claims 1 million members.

In an emailed statement, Amazon said “self-interested critics, particularly unions and groups funded by our competitors, have a vested interest in spreading misinformation about Amazon but the facts tell a different story.”

Amazon said it has invested more than $270 billion in the United States since 2011 and created more than 400,000 jobs. Amazon has committed to a $15 minimum wage for all of its workers, following criticism about wages in its warehouses. It has also pledged to reach net zero-carbon emissions by 2040 following demonstrations by activist employees who said the company wasn’t doing enough to address climate change.

An Amazon spokeswoman insists the demonstrations have not created any delivery problems, saying, “Our network is robust and flexible so it’s business as usual for us, and our customers will be receiving their orders on time as planned.”