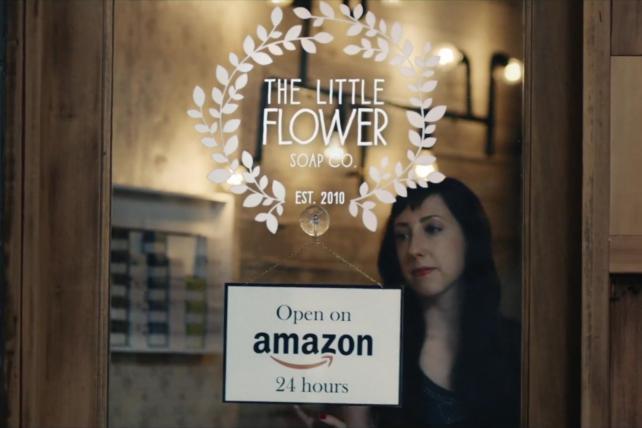 Amazon's latest commercial seems like a response to the U.S. politicians that have been blasting the company.

Set to "Let's Work Together" by the quintessentially American band Canned Heat, the ad promotes Amazon Storefronts, a new online section devoted to small businesses. Viewers see products from an American small business travel to customers across the country, in boxes traveling by bike and shipping containers traveling by rail.

"Together we stand, divided we fall," the lyrics assert. "Come on now people, let's get on the ball. Let's work together."

The ad campaign comes at an opportune time for Amazon, which has absorbed blistering attacks from both President Trump and Senator Bernie Sanders. Trump has threatened Amazon with tougher regulatory scrutiny and makes CEO Jeff Bezos a regular target, partly because Bezos also owns The Washington Post. Sanders has called for a tax on businesses like Amazon if they pay workers so little that they still qualify for federal welfare programs.

Although Amazon's new marketing doesn't address its own employment practices, it certainly tries to establish a new brand halo to polish, and one that bears at least indirectly on jobs.

Amazon claims that half the products sold through its platform come from small- and medium-size businesses. It does not reveal exactly how many small businesses are on the platform, only that more than a million from the U.S. sell there, and says that they have created 900,000 jobs.

There are a million products from 20,000 small businesses on Storefronts, Amazon said in a blog post. The ad is part of Amazon's first national campaign focusing on its relationship with small businesses, and it will run on TV, according to the post. Amazon declined to elaborate for this article.

Lucky Generals, a London creative agency, was behind the new commercial, which focuses on one of the small businesses on Amazon, Little Flower Soap Co. in Chelsea, Mich.