The Kindle Fire is Amazon.com's best-selling product, the company said in its first-quarter-earnings release. And it's being treated that way by the Amazon ad sales team. 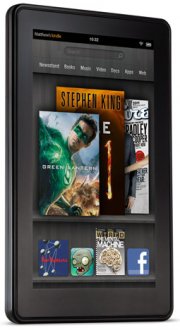 Amazon is pitching ads on the device's welcome screen, according to an executive at an agency that Amazon has pitched. The company has been telling ad agency execs that they must spend about $600,000 for any package that includes such an ad.

The ad campaigns would run for two months and also include inventory from Amazon's "Special Offers" product. For $1 million, advertisers would get more ad inventory and be included in Amazon's public-relations push, according to this executive and an exec at another ad agency."

An Amazon spokeswoman declined to comment. It's unclear whether it is pitching the ad for the current best-selling Kindle Fire or a future ad-supported version of the device, though the price tag would seem high for an ad unit on a device that currently has no distribution. Reuters has reported that Amazon is looking to start shipping a new Kindle Fire model in July.

Ad-supported versions of other Kindle models display full-screen ads that Amazon calls "sponsored screensavers" when users power down the device. It is not clear whether the Kindle Fire ads being pitched will appear in a similar way or when the devices are powered on or woken up.

Both agency executives have so far declined to participate, citing several concerns. For one, Amazon isn't guaranteeing the number of devices that the welcome-screen ads will reach, telling agencies that it hasn't decided whether the ads will start popping up on devices that have already been purchased or just on new devices.

"It's kind of an expensive buy to not get a guaranteed audience and measurement," one of these people said. "It doesn't comply with a lot of our necessary planning rigor."

Both execs are also worried about the consumer experience, especially if the ads start showing up on already-sold devices whose welcome screens haven't previously displayed advertising.

"You're already paying a premium for the product and then having that unexpected ad experience makes for a worse consumer experience," one of the execs said. "There needs to be a value exchange."

The pricing level is reminiscent of iAD, Apple's ad network that places ads within apps on iPhones and iPads. Apple was asking $1 million-minimum deals when iAd first launched, but over time cut the requested ad spend several times: to $500,000, $300,000 and, finally, to $100,000. Apple also has since simplified its pricing structure. Industry sources speculate that Amazon is attempting to build a competitor to iAD.

Amazon continues to push hard into digital advertising in other ways. In March, Ad Age reported that Amazon was pitching agency trading desks on buying inventory from Amazon's extension business, which puts ads in front of Amazon customers on sites other than Amazon.com. The main selling point for advertisers is the perhaps unparalleled transaction data that Amazon.com holds that can help advertisers target consumers across a variety of different types of segments.