READ THIS NEXT
What the TikTok ban means for brands 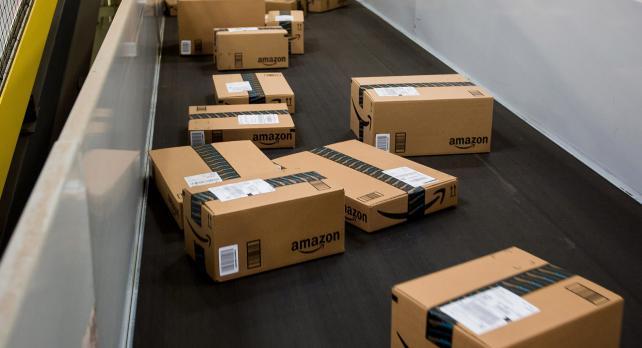 Amazon is experimenting with a new delivery service intended to make more products available for free two-day delivery and relieve overcrowding in its warehouses, according to two people familiar with the plan, which will push the online retailer deeper into functions handled by longtime partners United Parcel Service and FedEx.

The service began two years ago in India, and Amazon has been slowly marketing it to U.S. merchants in preparation for a national expansion, say the people, who asked not to be identified because the U.S. pilot project is confidential. Amazon is calling the project Seller Flex, one person said. The service began on a trial basis this year in West Coast states with a broader rollout planned in 2018, according to the people. Amazon declined to comment.

Amazon will oversee pickup of packages from warehouses of third-party merchants selling goods on Amazon.com and their delivery to customers' homes, the people say—work that is now often handled by UPS and FedEx. Amazon could still use these couriers for delivery, but the company will decide how a package is sent instead of leaving it up to the seller.

Handling more deliveries itself would give Amazon greater flexibility and control over the last mile to shoppers' doorsteps, let it save money through volume discounts, and help avoid congestion in its own warehouses by keeping merchandise in the outside sellers' own facilities.

"Amazon's final-mile efforts reflect a logical extension of its model as it builds network density," says Benjamin Hartford, a Robert W. Baird analyst, in a note. FedEx and UPS shares were likely to come under pressure, however, since investors could be concerned about another "data point of Amazon's encroachment on the broader logistics space," he said.

"Amazon is a valued UPS customer," says Steve Gaut, a UPS spokesman. "We support all our customers with industry-leading e-commerce solutions and expect to expand these relationships further in the future." FedEx says it won't comment on Amazon's plans but points out the "scale, infrastructure and complexity" involved in running a global transportation network. The company says it's innovating in ways related to new services for e-commerce residential deliveries, but notes that is "only one piece of the capabilities that we provide."

Last year, Amazon introduced Seller Fulfilled Prime, which lets merchants who don't stow items in Amazon warehouses still have their products listed with the Prime badge, meaning they'll be delivered within two days. The merchants had to demonstrate they could meet Amazon's delivery pledge, and many used UPS and FedEx for deliveries. The new service gives Amazon control over those deliveries instead, even if it continues to use third-party couriers.

Amazon has started looking beyond its own warehouse network to give shoppers quick access to an abundant assortment of goods. Its Fulfillment by Amazon offering already lets merchants ship goods to Amazon warehouses around the U.S., where they can be stored, packed and shipped to customers. That centralized approach can create logjams, particularly during the busy holiday shopping season.

Seller Flex would also give Seattle-based Amazon more visibility into the warehousing and delivery operations of its merchant partners, potentially helping it make full use of their product inventory, storage space and proximity to customers while still guaranteeing quick delivery.

The project underscores Amazon's ambitions to expand its logistics operations and wean itself off the delivery networks of UPS and FedEx. A rush of last-minute holiday orders in 2013 forced Amazon to issue refunds to shoppers who didn't get gifts in time, highlighting the perils of being overly dependent on partners for a main part of its business pledge—quick, reliable delivery. Taking over some responsibility for delivery enables Amazon to protect that edge as rivals like Walmart enhance their own delivery operations.

"Shares are going to be under pressure" for UPS and FedEx "because it's Amazon and no one wants to go head to head with them," says Kevin Sterling, a Seaport Global Holdings analyst. "But if you look at the world of e-commerce and double-digit growth year after year, FedEx and UPS are still going to get their share of growth. If Amazon does take a few customers, the whole ecommerce pie is growing so fast that FedEx and UPS won't miss a beat."

Amazon accounts for 5 percent to 10 percent of UPS revenue, according to analyst estimates, while FedEx has said the e-commerce giant accounts for less than 3 percent of its sales.

Amazon is constantly experimenting to shorten delivery times and reduce costs. It built a network of "sortation centers" around the country, where packages are sorted by zip code and trucked to post offices, with the U.S. Postal Service handling the final mile of delivery since it already has workers bringing mail to every home in the country. It launched Amazon Flex, which uses independent contractors driving their own vehicles to deliver packages from Amazon shipping hubs, guided by a smartphone app. Prime Now offers a limited assortment of products, such as phone chargers and bottled water, in as little as an hour to shoppers in many cities.

Many online merchants who sell on Amazon's marketplace pay fees to store products in the retail giant's warehouses, letting Amazon gather and pack products when orders arrive. But the popularity of this service strains Amazon's capacity during the end-of-year holidays. Online holiday spending in the U.S. will hit $129 billion this year, up 12 percent from a year ago, according to Forrester Research.