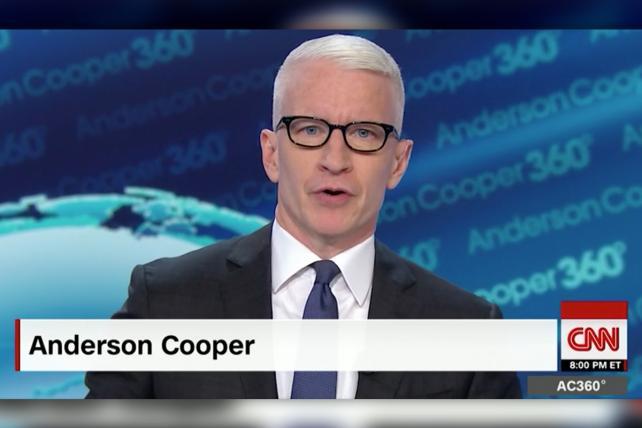 Anderson Cooper is bringing a version of his CNN show to Facebook, joining Shepard Smith of Fox News as the two main media stars tapped to join the social network's fledgling news platform.

On Wednesday, Facebook announced an initial lineup of seven news programs produced by networks and digital publishers to appear on Watch, the social network's video service. Facebook worked with networks like Fox News, CNN and ABC to create a curated news hub of content that would be seen as more credible than many of the random posts cycling through the News Feed.

Also important is that Facebook has been "willing to pay fair value for this," Morse says.

Fox News is producing "Fox News Update," with Smith as the anchor in the afternoons and other talent appearing in the mornings and on weekends. That show will be three to five minutes and stream live.

"The show will be to broadcast quality standards," says Jason Ehrich, FOX News SVP of Audience Development and Partnerships. "And it's going to be very fast paced."

Univision and ABC are the other television networks with shows. Digital publishers Mic and ATTN were also named in the first round.

Facebook has had a bumpy relationship with media as it draws audiences away from traditional channels. Media companies can find audiences on the social network, but it's been hard for them to make money there.

This year, Facebook worried many publishers by saying it would change its algorithm and show the average user some 20 percent fewer posts from media sites and more messages from friends and family in the News Feed.

There have been calls for the social network to pay fees to subsidize media, similar to profit-sharing strategies like carriage fees. Facebook hasn't appeared open to some of those formulas, but with this new news program, it is paying networks to create the shows.

"If we weren't able to monetize this effort, we wouldn't do it," Morse says.

Morse wouldn't say how much CNN was paid to create the show, but paying Cooper alone adds significantly to the cost. Some smaller publishers are being paid millions of dollars to create programs, according to people familiar with Facebook's terms.

Facebook is not only paying to produce the shows, it's offering a guaranteed minimum in ad sales, according to these sources. Facebook splits revenue from commercials that run during the shows.

"We will work closely with our publisher partners to experiment with these different formats to understand what works, and they will have full editorial control of their shows," said Campbell Brown, Facebook's head of global news partnerships, in a blog post on Wednesday.