A year and a half ago, AOL introduced Devil ads -- a series of new display-advertising units that featured more than two dozen different content elements, ranging from photo galleries to video players to store locators. Now, after serving more than 700 of these campaigns, it's bringing the concept to mobile phones and tablets. 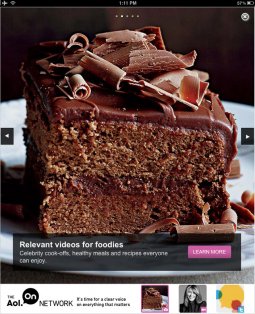 Unlike their traditional display brethren, mobile Devil ads don't at first glance look all that different from other more-typical mobile units. The new units appear as narrow rectangular bars across the top or bottom of the screen, and each unit contains up to three icons representing different content apps. A unit that 's live on Daily Finance's mobile site, for example, includes a photo icon which, when clicked, displays an image gallery that can be scrolled through by swiping left and right. A demo version of the tablet ad unit appears as a similar rectangular, this time along the bottom of the screen. When one of the content icons is clicked, an image gallery appears that nearly takes up the whole screen. It's a pretty smooth and appealing experience.

The ad unit itself doesn't stand out before a user clicks on it. On one hand, that could be viewed as positive, since people are perhaps even less open to advertising-related intrusion on mobile devices than they are on PC sites. But if someone is pitching a form of advertising that takes a more content-centric approach than a lot of other units out there, wouldn't they want to call readers' attention to it in a more meaningful way?

Greg Rogers, CEO of AOL-owned Pictela, which makes the content-management system that powers these ads, said the screen size of cellphones dictated the look and feel.

"You never want to force fit," said a Cannes-tanned Mr. Rogers, in an interview yesterday at AOL's office.

AOL already has at least one big media agency excited about the move. "One of the gating factors for mobile has been our inability to deliver dynamic creative within limited real estate," Universal McCann Chief Media Officer David Cohen said in an email. "Pictela brings to the table a powerful and scalable platform which crosses screens. We are encouraged at the development and look forward to pioneering on the platform."

That statement also points to the fact that no one has yet nailed mobile advertising. There is money being made -- the industry is expected to generate $2.6 billion in revenue this year, according to eMarketer -- but there is also considerable debate about whether mobile advertising spend will ever match mobile usage.

Putting the appearance of the ads aside, Mr. Rogers said the expansion of the Pictela platform to mobile and tablet advertising is a big step toward capturing the original vision he had for the company when he co-founded it.

"Back when I pitched my investors, I imagined a day when you could serve, control and optimize a rich brand story across multiple screens," he said. With this product release, agencies can choose to run the same content elements within ads across three screens and then get reporting on what pieces of the ads resulted in what level of interaction on the different screens. Or they can mix and match what is shown in the ads based on the device on which the ad is running.

Perhaps more than anything else, AOL's future under Tim Armstrong hinges on its ability to sell big brand advertisers on its high-priced Devil ad units. These ads command higher CPMs than most display ads because of their varying rich content elements. Yes, it is still advertising in a rectangular box -- but the best Devil ads contain forms of media that are actually enjoyable to navigate and bring a sense of storytelling to digital.

AOL will, of course, be out selling these units to run across its own mobile sites and apps, which amassed 28 million unique visitors in March, according to ComScore. But part of the approach, as with the desktop display ads, will involve selling the Pictela technology to other publishers based on an ad-serving fee model. Mr. Rogers wouldn't reveal exact pricing, but said "we're priced very aggressively to scale." He said fees will be lower than what custom, rich-media competitors charge, but higher than fees for ad-serving that don't contain rich media.

"We want scale and wide adoption," he said.