It was supposed to have it all: a wardrobe from the stylist of the "Mo Money Mo Problems" music video, a Jonah Hill voiceover, and prime ad spots tonight during the telecasts of Monday Night Football and "The Voice." 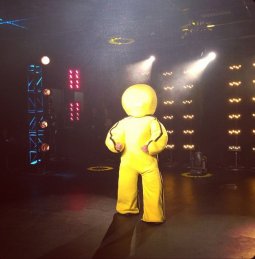 But the first AOL TV commercial of CEO Tim Armstrong's reign has been postponed until the new year, multiple people familiar with the campaign told Ad Age .

AOL spokeswoman Caroline Campbell confirmed that the company's brand campaign will not launch today, as expected, but that it will launch sometime in 2013.

"Where we are today with the campaign is not great and we want to move it from good to great," she said.

She would not comment on whether the campaign will end up including TV commercials. McCann, the lead agency working on the campaign, referred all questions to AOL.

The Wall Street Journal last week reported that AOL was due to launch a $10 million campaign this week, and that there were some creative disagreements that arose during the process when Mr. Armstrong pushed to end the 60-second spots with video of people dancing next to an AOL logo. Ad Age has confirmed those disagreements and has learned some more details about the process from multiple people familiar with the planning.

While McCann was hired to produce the commercial, Mr. Armstrong became highly involved in its creative direction. It was his intent to incorporate dancers into the ending of the 60-second spots and shorter 15-second spots, these people said. Mr. Armstrong attended auditions for the dancers, two of which happened at AOL's own studio.

That process was run independently of McCann, with AOL bringing on celebrity stylist June Ambrose, who has done wardrobe styling for hip-hop videos such as the one for Notorious B.I.G.'s song "Mo Money Mo Problems." (Ms. Ambrose posted several photos from the shoot to her Twitter and Instagram accounts.) People familiar with the process said Mr. Armstrong was in favor of having parts of the commercials take cues from the "Mo Money Mo Problems" music video, which featured hip-hop artists Diddy and Mase rapping in shiny suits.

These people also told Ad Age that former AOL Chief Marketing Officer Jolie Hunt didn't favor the creative direction Mr. Armstrong was pushing for, and that disagreements between the two over the creative process contributed to her exit from the company. Last week, Tim Armstrong told Ad Age that Ms. Hunt's departure was part of the company's push to decentralize marketing and make the individual content and product brands within AOL more responsible for their own marketing projects and budgets.