Guess Gets Verified Kanvas Account, Will Live-Stream Miami Event
READ THIS NEXT
Major League Baseball is the latest brand to recruit TikTok creators 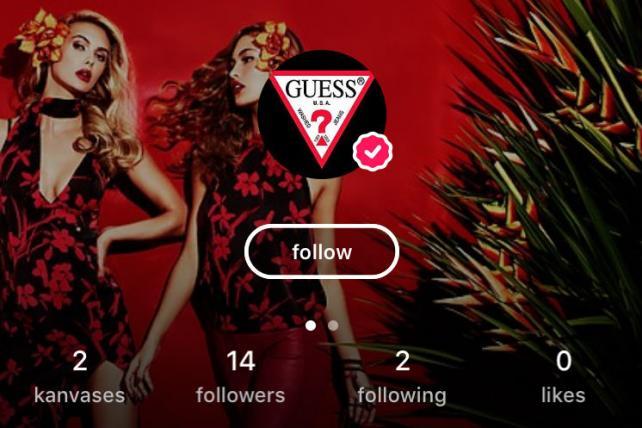 AOL has a live-streaming app, too. A couple months after it acquired mobile app maker Kanvas Labs in August, it released an updated version of Kanvas' photo-and-video-sharing app that added live-streaming to rival Twitter's Periscope, Meerkat and Facebook Live. And now it's signed its first moneymaking deal with a marketer.

Clothing brand Guess will use AOL's Kanvas to promote its #GuessAllAccess campaign by live-streaming an event the brand is throwing in Miami on Tuesday with Flaunt Magazine. The campaign marks the brand's first foray into the mobile live-streaming space that emerged earlier this year with the launches of Periscope and Meerkat.

A brand trying out a new piece of technology isn't necessarily newsworthy. It happens fairly often and usually for free. However in the case of Kanvas and Guess, there's money being spent. "If money changes hands, the bar is raised in terms of the experience that you have to deliver on both sides," said Kanvas Labs co-founder Vic Singh.

Mr. Singh and a Guess spokesman declined to say how much money the brand is spending with Kanvas, but Mr. Singh said the deal was "not cheap."

Guess declined to make an executive available for an interview, but a spokesman said Kanvas had a broader feature set than its rivals. "Guess is partnering with Kanvas because the mobile app provides a unique platform where users are able to customize and animate their livestreams with a broad range of animation options in real time, which many of its competitors cannot do," the spokesman said.

Here's what Guess is getting for its money: a branded live-stream that will be promoted on Kanvas and across Guess's own social accounts, a branded filter to use for the live-stream, a verified account on Kanvas and a promise that Guess would be the only fashion brand on Kanvas until after its event concludes on Tuesday.

Guess endorser Grace Elizabeth will host the live-stream, during which she'll give a behind-the-scenes tour of the event and solicit questions for celebrity interviews. People watching the live-stream will see a branded filter framing their view that Kanvas's team designed for Guess.

Guess is aiming the campaign at "a Centennial and Millennial audience, who are part of the creative community," the brand spokesman said. The brand will promote its live-stream to the more than 8 million people who follow it on Facebook, Twitter and elsewhere in hopes of driving "a small percentage of this total to download the Kanvas app and to be a part of the livestream," the spokesman said.

Mr. Singh declined to say how many people use Kanvas each month, but said the app's registered user base has grown beyond the 2 million registered users it counted in October with "a high percentage" of those registered accounts being active users.

Kanvas is something of a mash-up between Periscope, Snapchat and Tumblr, with "live being the capstone of our offering," according to Mr. Singh. People can live-stream what they're doing from their phones as they would on Periscope, but they can also add filters and graphics to those videos like they might on Snapchat. Unlike either Periscope or Snapchat, people can add these animations while a video is streaming live so that viewers could watch them as they trace out a drawing.

To get a bit farther afield from the standard live-streaming app, Kanvas also rolls up GIF-making abilities so that people can create and post animated GIFs within the app, like they could on Tumblr. And people can share Kanvas posts on social networks such as Facebook, Twitter, Instagram and Tumblr in exchange for in-app currency that can be used to buy stickers and filters for their own posts.

Coinciding with the Guess deal, Kanvas is rolling out verified accounts so that people can now see if a brand or celebrity is actually the person behind a Kanvas account. Facebook, Twitter and Instagram offer verified accounts as a way to make celebrities and brands more comfortable using their services -- and easier to find on those services -- where fake or parody accounts may already exist. Other than Mr. Singh's own account, Guess is the first Kanvas account to be verified.

However instead of calling them verified accounts, Kanvas is going with the moniker "Kanvas Official" and appending a pink (not blue like other platforms) checkmark to those authenticated accounts. "Our audience is very much teenagers and to be verified sounds not as cool as to be official," Mr. Singh said.

There isn't exactly an official process of becoming "Kanvas Official." People can email requests to be verified to Kanvas, but Kanvas will also be looking at celebrities that have joined Kanvas or become celebrities through Kanvas -- Kanvas's version of YouTube stars, if you will -- as well as brands that either already use Kanvas or are looking to do so.