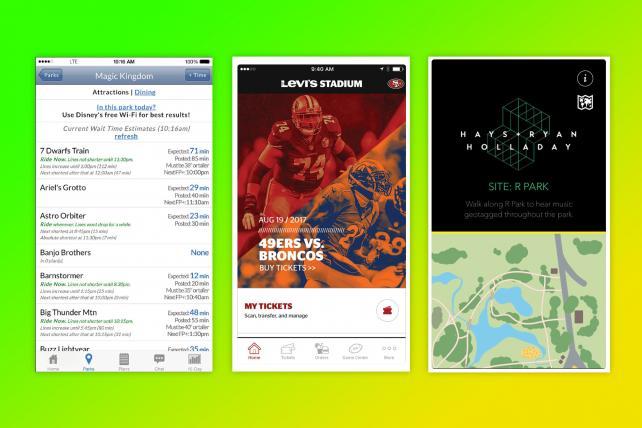 As society lurches between glowing screens, it's increasingly clear that living life is living with a device in your face. Luckily, a new generation of apps enhance, not overshadow, inherently analog experiences with just a soupçon of technology. Think of them as on-screen prompts to get back in touch with your meat suit.

This collection of time-saver apps from TouringPlans (search for the apps via the developer) helps you orchestrate a family park vacation by factoring in school calendars, economic indicators and other data to tell you the best times to visit—or avoid—destination parks. The apps (e.g., Disney World Lines) can then customize your itinerary, direct you to the rides where lines are shortest (gleaned from historical data from more than 140,000 annual subscribers) and more. Intentionally lo-fi-looking to save battery life and work within the congested parks, Lines can save up to four hours of waiting per day, boasts TouringPlans.

Sure, Dan Deacon made waves for his touring app that turned concertgoers into stage props, but brothers Hays and Ryan Holladay might be the original innovators in app-altered live music. The duo creates location-aware compositions, essentially albums meant to be listened to at specific sites. Listeners download one of the site-specific apps (search "Bluebrain" or "Holladay") and what they hear transforms as they move around, thanks to the phone's GPS. Bluebrain albums have guided listeners through places like Central Park and the National Mall. For 2018, the Holladays will add an album with an unusual collaborator, the U.S. State Department, tied to the new U.S. Embassy in London.

Man-bun bar culture meets SXSW in this beta web app (live.nsbl.com), offered at Full Circle Bar locations in Brooklyn and Austin, Texas. This is the vision of Brewskee-Ball, the national Skee-Ball league, for the future of the beloved 110-year-old sport: an app that syncs with an internet-connected but otherwise vintage-y Skee-Ball lane so players can compete against friends countrywide, either in real time or one leisurely frame at a time. Skee-Ball Live handles payment, releases your nine wooden balls when it's your turn and tracks your score, plus long-term stats. The Live Lane feature registers your rolls and streams images of you celebrating your latest "full circle" (that's nine straight 40s, for the layman).

An app that aims to cure sleep apnea with ... the didgeridoo? Insane as that sounds, in the mid-2000s musician and physical therapist Alex Suarez hypothesized that vibrations caused by playing a didgeridoo, the long cone-shaped wind instrument indigenous to northern Australia, could treat sleep apnea and related conditions such as asthma by strengthening the throat muscles and connective tissue. The Snadoo, currently in clinical trials, is a medically minded version of a didgeridoo that connects with an app that has exercises to better address a user's specific medical condition. Suarez and his colleagues' work was recently honored with the Ig Nobel Peace Prize—a parody "for achievements that first make people laugh then make them think"—presumably for offering warring sleep-deprived spouses some hope.

If attending a live sporting event is more trouble than it's worth, this company's apps could help. App developer VenueNext partners with sports venues to create official team stadium apps for an increasingly large number of professional sports teams (to find an app, search for "VenueNext"). At a San Francisco 49ers game, you can order food and have it delivered without leaving your seat. At the most recent Super Bowl, you could get live wait times for the nearest restroom. And almost every iteration of a VenueNext app includes creature comforts like home announcer audio feeds, live stat access and various augmented reality views. And if you look up from your phone, you can actually watch the game.

Nathan Mattise
Nathan Mattise is an Austin, Texas-based editor at CondÃ© Nastâ€™s Ars Technica by day and a novice Skee-Ball player by night.
Follow View all articles by this author