Apple Stores Get Consumer Petitions Over Worker Treatment in China

A group of activists delivered some 250,000 signatures to Apple stores in Grand Central Station and elsewhere Thursday morning, calling for better treatment for workers in Apple suppliers' factories in China.

The petitions -- one from Change.org with about 199,000 signatures on the web and one from SumOfUs with 57,000 signatures -- comprise perhaps the most tangible showing of consumer outrage over labor conditions in the iPhone and iPad maker's supply chain overseas. They also went to Apple stores in Washington, D.C., San Francisco, London, Sydney and Bangalore.

In New York, the delivery saw about 10 activists and at least twice as many reporters climb the stone steps to the entrance to the recently opened Grand Central Apple Store, where stoic store managers accepted a large cardbox box of printed signatures.

The petitions call on Apple, which recently reported record earnings and an estimated $100 billion in assets, to develop a more stringent worker protection strategy to combat abuse and exploitation in Chinese supplier factories, including Foxconn.

"We're coming together as fans of Apple, who buy their products, to say, 'We want an ethical product,'" said Change.org's Shelby Knox, who helped deliver the petition wearing a giant iPhone sandwich board. "You are a leader in technology, and we want you to be a leader in bringing ethical products to the United States."

After a pair of New York Times articles on labor conditions in Apple supplier factories, Apple said last month that it is constantly inspecting its supply chain and improving conditions. "We care about every worker in our worldwide supply chain," Apple CEO Tim Cook said in an email to company employees. "Any accident is deeply troubling, and any issue with working conditions is cause for concern. Any suggestion that we don't care is patently false and offensive to us." 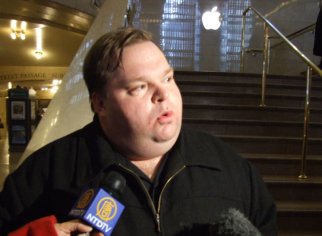 The advocates in New York on Thursday also included Mike Daisey, a monologist who visited Foxconn's massive Shenzhen, China, factory in 2010, and spoke with workers and underground union leaders about their experiences on the assembly lines. His work was recently excerpted in public radio's "This American Life," helping to spark the petition.

Mr. Daisey called Apple "terribly arrogant" in its PR response to the growing concerns. "Its brand is in serious jeopardy now," Mr. Daisey said. "Apple's greatest asset is their brand, and it does not take very long for a brand to be tainted. When I think of Nike even today, the second or third thing I think of are sweatshops."