Apple cracks down on apps sharing info on users' friends 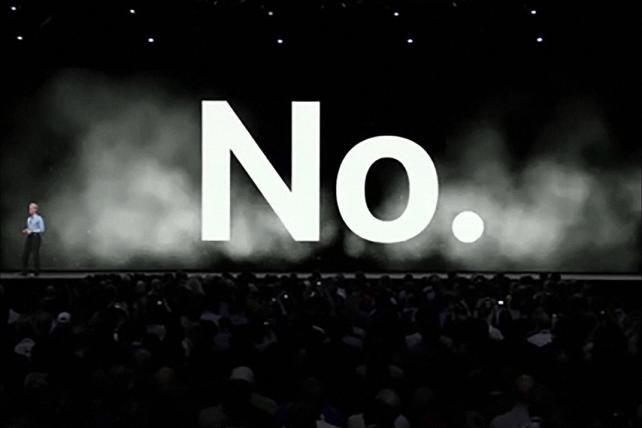 Apple Inc. changed its App Store rules last week to limit how developers harvest, use and share information about iPhone owners' friends and other contacts.

The move cracks down on a practice that's been employed for years. Developers ask users for access to their phone contacts, then use it for marketing and sometimes share or sell the information -- without permission from the other people listed on those digital address books. On both Apple's iOS and Google's Android, the world's largest smartphone operating systems, the tactic is sometimes used to juice growth and make money.

Sharing of friends' data without their consent is what got Facebook Inc. into so much trouble when one of its outside developers gave information on millions of people to Cambridge Analytica, the political consultancy. Apple has criticized the social network for that lapse and other missteps, while announcing new privacy updates to boost its reputation for safeguarding user data. The iPhone maker hasn't drawn as much attention to the recent change to its App Store rules, though.

As Apple's annual developer conference got underway on June 4, the Cupertino, California-based company made many new pronouncements on stage, including new controls that limit tracking of web browsing. But the phone maker didn't publicly mention updated App Store Review Guidelines that now bar developers from making databases of address book information they gather from iPhone users. Sharing and selling that database with third parties is also now forbidden. And an app can't get a user's contact list, say it's being used for one thing, and then use it for something else -- unless the developer gets consent again. Anyone caught breaking the rules may be banned.

IPhone contact lists contain phone numbers, email addresses and profile photos of family, friends, colleagues and other acquaintances. When users install apps and then consent, developers get dozens of potential data points on people's friends. That's a trove of information that developers have been able to use, beyond Apple's control.

In the years following the launch of the App Store in 2008, contact-list abuse surfaced from time to time, and in 2012, Apple added a way for users to explicitly approve their contacts, photos, location information, and other data being uploaded by developers. Some apps, including Uber and Facebook, let users remove contacts that have been uploaded. Even so, there's no mechanism to do that for all apps that have been installed on an iPhone.

Aside from that, Apple's rules on contact lists have remained relatively consistent for a decade. Balancing user privacy with the needs of developers has helped the company build a profitable app ecosystem. Apple said last week that developers have generated $100 billion since the App Store launched. The company typically takes 30 percent of app revenue and runs search ads in its App Store.

"They have a huge ecosystem making money through the developer channels and these apps, and until the developers get better on privacy, Apple is complicit," said Domingo Guerra, president of Appthority, which advises governments and companies on mobile phone security. "When someone shares your info as part of their address book, you have no say in it, and you have no knowledge of it."

While Apple is acting now, the company can't go back and retrieve the data that may have been shared so far. After giving permission to a developer, an iPhone user can go into their settings and turn off apps' contacts permissions. That turns off the data faucet, but doesn't return information already gathered.

The Google app store works a similar way. On the company's help page about app permissions, under "Important," it says, "If you remove permission for an app, this action won't delete the info the app already has. However, the app can't use new info or take actions from that point on."

The difference is that Google mostly keeps quiet about how it uses people's data for advertising, while Apple often talks about not collecting user information or building profiles of them. The iPhone maker also rolled out extra privacy controls to comply with a strict new European law earlier this year and has fought U.S. government efforts to access user data on its devices.

One developer contacted Bloomberg News in the aftermath of Facebook's Cambridge Analytica scandal, expressing concern that Apple users may not understand what developers can see when they provide access to their contacts. The developer requested anonymity for fear of retribution from Apple or the developer's employer.

Once a user clicks OK, developers can download the information the user keeps about everyone in their address book. That might include not only names and phone numbers, but other data such as birth dates, home and work addresses. If people attached a photo to their friends' profiles, the developers get that, too. The app-maker can also learn when a contact entry was created and edited, giving clues on the accuracy of the phone number, and whether this is a new or old acquaintance.

"The address book is the Wild West of data,'' the iOS developer said. "I am able to instantly transfer all the contacts info into some random server or upload it to Dropbox if I wanted to, the very moment a user says okay to giving contacts permission. Apple doesn't track it, nor do they know where it went.''

Another developer said they've only seen one app that collected user contact lists for dishonest purposes. And many uses for contact information are well understood. When downloading a game, the game-maker may ask for contacts permission to show you friends who also have the app who you can play with, or they may build an easy way for you to text a friend about joining you on the app. Apps like Instagram and Snapchat ask for contact information to help users build social networks. The Bloomberg News app also asks for access to users' contact lists, and other web services access email address books, so it's not just an Apple or Google problem.

The Federal Trade Commission warns consumers to be wary when apps ask for information unrelated to the purpose of the app. On its website, the FTC says any information collected by developers can be shared with third parties or used to build databases.

Contact information may not always be directly useful to a developer's app, unless it has a social or chat component. But it could be sold to data brokers, who combine it with other information to help companies sell goods and services online. And in some cases, it's a tool to market an app to other people with an endorsement from the person who downloaded it.

Last week, Apple banned apps from contacting people using information collected via a user's contacts or photos "except at the explicit initiative of that user on an individualized basis." Developers must also provide users with a clear description of how the message will appear to the recipient before sending it.

That type of bulk-texting has been the basis of viral growth for apps like the 2016 sensation Down To Lunch, which let people invite all their friends to lunch at the same time. It's also been a common tool in political campaigns, supported by companies like CallHub.

In early 2017, some iPhone users began getting texts from an app they'd never heard of before. "A friend added you on ChitChat," the messages said. "Tap here to get it."

ChitChat was built by Swipe Labs, a social product design studio that was using contact list access to market its new messaging service to users' friends. In effect, digital cold-calling on steroids. People complained on Twitter, where venture capitalist Chris Sacca called it "the herpes of contact lists."

"We had some issues with too many notifications being sent out," he added. A new version of the app that "throttles down notifications" was sent to Apple for review, Roushdy explained. Swipe Labs was acquired by Uber Technologies Inc. a few months later.

In 2013, the FTC sued social-networking app Path over collecting address book information from iPhones and Android phones without user consent. Path settled and committed to not misleading users in the future. Apple CEO Tim Cook met with Path's CEO to chastise him for the practice, Bloomberg Businessweek reported at the time.

While Apple and Google have taken steps to improve app permissions, when things go awry, regulators tend to put the onus on the apps, not the operating systems. In 2013, the FTC settled with a flashlight app on Android phones for collecting location information and selling it to advertising networks without consumers knowing.

Facebook has stressed that the practice of developers sharing users' friends' data was against its rules. The social-media giant banned the developer who shared this information with Cambridge Analytica. And it made the political consulting firm sign an agreement confirming it had deleted the data back in 2015. This March, the New York Times and other outlets reported the information hadn't been deleted. The episode started a new global discussion about privacy, with European and some U.S. lawmakers arguing consumers should dictate where their data flows, not giant tech companies.

On the social network, users make their own profiles, while smartphone address books contain digital dossiers that people make about other people. There may be hundreds of versions of people's contact information that they have no control over. The same person might be "Dad" on one phone and "Craigslist Couch Guy" on another. The woman who bought his couch years ago may still be inadvertently sharing his address with the game she plays on her iPhone every morning.