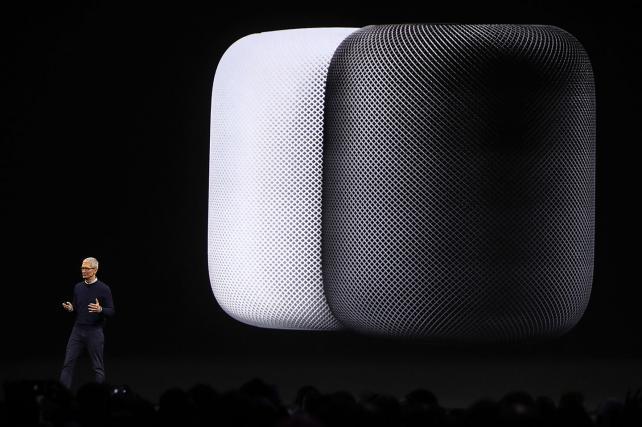 Apple CEO Tim Cook unveiled the Home Pod at WWDC this week, but it won't be ready for consumers until December.
Credit: Justin Sullivan/Getty Images

Apple wants into your home, but not in a weird way.

The Home Pod, Apple's Siri-voiced speaker, was unveiled this week, with a premium price tag -- $350 -- and Apple is playing up the privacy of the device. The marketing around Home Pod, which won't kick off in earnest until the fall, will focus heavily on the privacy aspect of Apple's device compared to the Amazon Echo and Google Home, according to people familiar with Apple's strategy.

"They're really focused on privacy," said one person with knowledge of Apple's marketing plans. "There is no bloatware, no tracking, and they're not selling your information. That's completely different from Google Home and Amazon Echo."

Apple will need that privacy message to matter if it wants to catch up in the home-speaker space. Amazon has already sold 15 million Echo speakers, according to Forrester, and it is almost ready to launch its next-generation device that will feature a screen to display more information.

Echo and Google Home have both been opened up to outside developers and brands to build services that interact with people in their homes and infiltrate their daily habits. Publishers like The New York Times and Bloomberg develop for the home speakers, appliances interact with them through voice controls, and consumers can shop through them.

But they can also be perceived as creepy monitoring devices that listen in on the home, and sometimes turn on without anyone even prompting them. Amazon Echo has been subpoenaed for recording taken during alleged murders.

"Apple is also starting to differentiate their approach to reassure consumers about their privacy," said Thomas Husson, a principal analyst at Forrester. "How their data is being used is a key area moving forward where both Google and Amazon are, for now, less legitimate given their core business models."

Apple doesn't have the same demands on its business to commercialize consumer data, and it's taken a stronger stance against digital tracking. At the Worldwide Developers Conference, where it revealed the Home Pod, it also launched its next-generation operating systems and browsers, and it emphasized the ability to control Web tracking.

The restrictions, however, could also make it tougher for partners to build for the Home Pod.

It will be much more of a walled garden and privacy will be the biggest concern, said people familiar with the matter.

At WWDC, Apple didn't have launch partners ready to promote special services, but that doesn't mean they're not being developed.

"We are already thinking about it," said one media executive speaking on condition of anonymity. "We are discussing how we think of connected devices and coming up with the principles that will guide what we're going to do to be live on the Home Pod."

Marketers that are developing for home speakers are looking for any new insights into consumers' mindsets. For instance, Tool North America, an agency that specializes in artificial intelligence and internet of things technology, is interested in even understanding people's moods based on how they sound talking to home devices.

A person could be happy or stressed, and brands could use that for more targeted messaging, said Dustin Callif, a managing partner at Tool.

That's the kind of data Apple could guard closely, but Callif thinks the company also will want to have the most helpful service it can.

"If it's going to enhance their platform in a way that gives a better experience for consumers or brands," Callif said. "They'll understand this is all part of what they need to be experimenting with."