Arriba Mexico Is the Airbnb for Homes Destroyed by Earthquake

Arriba Mexico looks like the popular home rental site, but with one big difference: the charming Mexican homes offered with descriptions like "pet-friendly loft with beautiful view" were completely destroyed in Mexico's recent earthquake, as the photograph of each former dwelling makes clear. 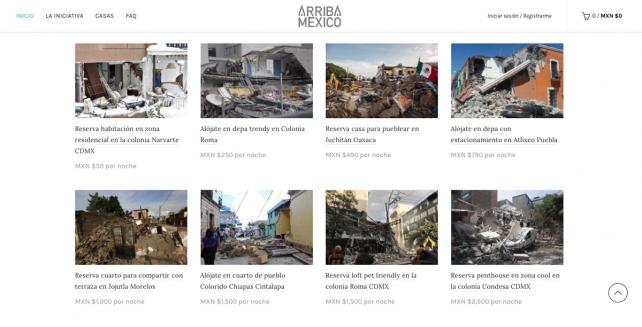 Visitors to Arriba Mexico pick their rent-a-ruin, and the number of days. The total amount owed is their donation to an innovative fundraising program to rebuild homes destroyed by the earthquake and help those left homeless.

Edgar "Fader" Elorza and Angel "Cheche" Rodriguez, two creative directors from independent Mexico City agency Anonimo, came up with the idea when they realized the streets were already full of people who had rushed to clear debris from the Sept. 19 earthquake. They could contribute more with a powerful idea.

Visitors can make donations in Mexican pesos, dollars or euros. On Monday afternoon, a week after the site opened, donations totaled $15,700 according to the tally at the bottom of the home page.

Arriba Mexico (rough translation: Up With Mexico) is spreading rapidly through social networks and coverage in Mexican media. Facebook, Google and Twitter in Mexico have all offered to help grow the effort, Cardos says. 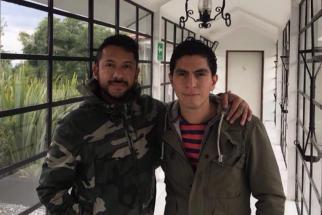 It's also an initiative that can scale to support disaster relief in other places, like Puerto Rico after devastating Hurricane Maria.

"One thing we love about it is that it is an idea that can become global," Cardos says. "We are in conversations with people from Puerto Rico that saw it and contacted us to explore the possibility to develop Arriba Puerto Rico. We are currently working on it and, if everything works fine, will launch it soon."

In Mexico, 100% of donations will go to a respected disaster relief group called CADENA. Initially money will be spent on tent-like shelters for five people to provide temporary, safe housing for families left homeless by the earthquake. The next step will be to rebuild homes in the most heavily damaged areas of Mexico City, Oaxaca, Puebla and Chiapas.

The eight homes photographed by Anonimo and featured on the site include several from the trendy Mexico City neighborhoods of Condesa and Roma, which are particular favorites on the real Airbnb. The New York Times even did a story about the two communities last week headlined "Quake Threatens to Cause Flight From Mexico City's Hip Neighborhoods."

Arriba Mexico rentals range from $15 to $250 a night, and can be booked for multiple nights. A minimalist penthouse in Condesa, for instance, is available for $137 a night. Click through to read the longer listing, which includes use of a van, which may be the vehicle shown crushed beneath the rubble that used to be the penthouse. The description also includes an Airbnb-like list of amenities. Every single one is crossed out. (Just in case there's any doubt, the first question on the FAQ page asks "Am I really going to stay in a destroyed home?" The answer is "No, there is no access to any of the buildings. The rental is symbolic, and the money raised will benefit the earthquake victims.")

Anonimo's own Mexico City office was relatively undamaged, but it closed for a week after the earthquake so staffers, many of whom live in the hard-hit Condesa and Roma neighborhoods, could look after their own homes or do relief work in their communities.

And what about the real Airbnb? Cardos says Anonimo is trying to contact the company to see if it would like to get involved. "It would be an amazing move to be able to host 'our properties' on their platform," he says.