Automakers Testing Mobile Tech You Can Tap To 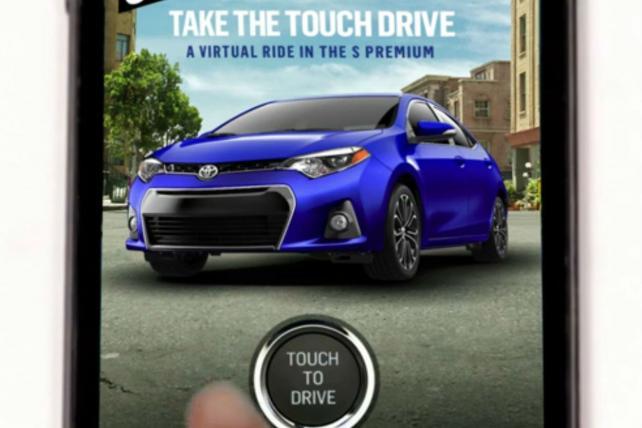 Automakers such as Ford and Toyota are illustrating how static ads on screens and billboards can quickly generate dynamic ads for the smartphone through the use of near-field communication, the short-range wireless communications technology that's behind Apple Pay and works with a quick tap of the phone.

By 2018, IHS expects global shipments of near-field communication-enabled phones to soar to 1.2 billion, up from 275 million in 2013. That opens a wealth of possibilities for marketers to turn smartphones into a more robust marketing medium.

For instance, marketers are placing advertising on specially equipped screens and signs and using near-field communication technology to let consumers tap the displays with their smartphones to get more information.

When Ford Motor Co. went looking for ways to experiment with mobile ads, it found an answer in the back of a New York City taxicab. Ford's Lincoln brand teamed with Blue Bite, a mobile marketing company that uses near-field communication technology on its mTag platform, to interact with business travelers hopping in and out of taxis in one of the auto industry's luxury meccas.

If a passenger's Android phone had a near-field communication chip, a 15-second MKZ spot would begin playing on the taxis' rear-seat information screen, said Trisha Habucke, Ford's digital marketing manager. Those interested in more MKZ information could either tap their phones beneath the screen or scan a quick-response code to receive exclusive content on their devices.

Commuters could tap their near-field communication-equipped phones to the signs to learn more about the Corolla and take virtual drives.

Ford plans another New York taxi pilot with the Mustang, following the success of the MKZ effort. Ms. Habucke said 30 percent of people continued on with the experience through their phones.

"We began to play a little bit with that," Ms. Habucke said. "That set the tone to say, 'Yes, there are people interested in doing that.' We didn't think we would get such a good take rate."

Ford also is experimenting with beacons, small devices that send information to people's smartphones via Bluetooth, which provides a slightly longer range and may be handy for dealerships.

Ford demonstrated the beacons on an MKC crossover during a recent Mobile Marketing Association event. Beacons were placed on the hood, side and trunk of the crossover. Ford provided an iPhone, Apple Watch and Android phone for onlookers to sample how the beacons worked.

The beacons and the phones worked together to beam information about a particular area of the vehicle to the smartphones. If a person approached the hood of the car, for example, details on the EcoBoost engine would be displayed on the phone.

Ms. Habucke said beacons could be useful on dealer lots after hours, when people can't access the vehicles. Beacons, she said, could tell a shopper about the details of a car's interior when they can't get in it.

She said beacon technology would be the natural successor to quick-response codes, which are plastered on the window stickers of vehicles and can be scanned with smartphones to provide shopping information.

However, Ms. Habucke said the beacon signal would need to be fine-tuned so it wouldn't go overboard and beam information to people who aren't at the store.

"The hiccup that we've read about and that we think about is limiting the size of the radio waves. You don't want to pick up people that are passing by a store," she said. "You want to make sure they are in your store. We don't want to give an offer to somebody two miles away."

--Vince Bond Jr. is a reporter for Automotive News