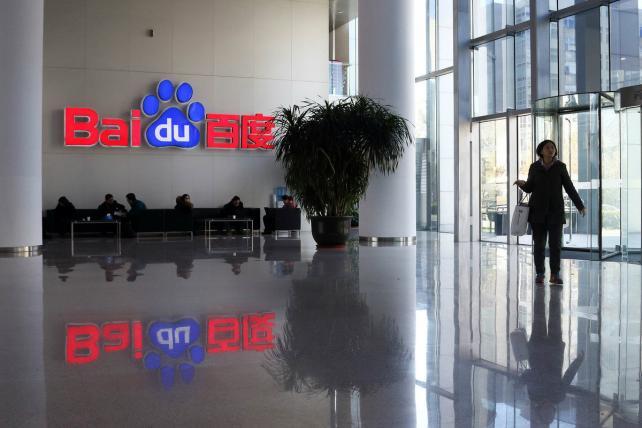 A woman walks past the Baidu logo at the company's headquarters in Beijing, China.
Credit:

China's Baidu warned that restrictions on online advertising will hurt revenue growth for the next two to three quarters, delivering the latest dose of bad news about China's largest internet search service.

The company forecast lower-than-expected sales of $2.7 billion to nearly $2.8 billion this quarter, hit by government limits on the amount of ads it can show users. The bottom of that range translates to a decline of 1.9%, which would be the first drop at the search giant founded by Robin Li since at least 2007.

"The implementation of new regulations and the stricter standards that we proactively imposed to make our platform more robust will likely suppress revenue for the next two to three quarters," Li said. "This period of uncertainty will pass."

China has been tightening up the rules on online advertising, requiring search engines to limit the number of sponsored results per page, to clarify when results are actually ads and to check advertisers' qualifications.

The company, which has endured a number of setbacks to the business since the start of the year, is now looking beyond the next few quarters. Li described how Netflix-like iQiyi will be an "important pillar" as the company spends billions on ventures outside of search and into areas from media to artificial intelligence and the cloud.

But it would likely be another 12 months before revenue and profits could start returning to their normal pace of growth, said Kirk Boodry, an analyst at New Street Research. Other internet companies would be developing technologies to blunt Baidu's competitive edge during that time, he said.

"You can get past the regulatory hurdles but then people have to make a decision on whether the advertising revenue growth by that point is going to be spread among a lot more players," he said. "It's hard to draw a direct line between artificial intelligence and revenue growth outside of search."

Baidu sounded its cautionary note after also posting a 34% plunge in second-quarter net income, its largest since at least 2007. Customer growth will continue to slow as it adapts to the new government guidelines, Chief Financial Officer Jennifer Li told analysts on a conference call.

The decrease in customer growth will pressure sales and margins. Much of Baidu's search revenue comes from cost-per-click keyword auctions where advertisers bid on how much they're willing to pay for prominence in search results. Fewer clients means fewer bidders and lower prices.

Baidu's disappointing outlook caps a series of blows to the company. It was forced to slash revenue forecasts for the second quarter in June, responding to the new regulations. It faces a higher tax rate, thanks to the government reclassifying some key services as ads. And this week, the company announced the withdrawal of a Robin Li-led bid for iQiyi -- a sale that would have given the company a $2.3 billion capital injection, according to Moody's Investors Service.

Even the impending Summer Games may not yield a big boost to the bottom line. While the country has long been passionate for the Olympics, CEO Li said the expected surge in Internet traffic during the 2016 Rio event wouldn't exert a significant influence on its third quarter.

"For the Olympics we did get some ad budget from the larger customers but overall it's not that meaningful for the quarter," he said. "During the Olympics, the traffic mix will change so the percentage of traffic that has commercial value actually could decrease during that period."