Mattel knows Barbie has the hearts and minds of many little girls around the world. Now the company has set a new target. It's out to win over moms, and while they're at it, dads too.

The company has created a new video aimed directly at parents with the tagline "You Can Be Anything." BBDO San Francisco handled the campaign. Using hidden cameras, the video shows little girls pretending to be professionals in real-life settings. They take on the role of college professor, soccer coach, veterinarian, businesswoman and museum guide, while the adults around them play along.

The video was unscripted and the careers were chosen according to what the budding actresses told the casting team they wanted to be when they grew up, according to Matt Miller, executive creative director at BBDO. It is part of a year-long campaign that will include social media, as well as additional videos and regional efforts. In June, the brand introduced more ethinc diversity to its line of dolls.

"We are absolutely listening to the cultural conversation and we wanted to start a conversation with moms," said Evelyn Mazzocco, senior vp and global brand general manager, Mattel. 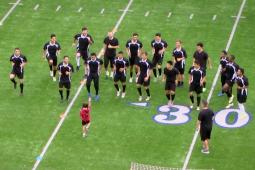 This soccer team and its new coach, Maddie.

It's been several years since the brand targeted parents and like many brands it's eager to better relate to a new generation of millennial moms and dads.

"This generation of moms has been bombarded with images with Barbie, but don't know why Barbie was created in the first place," said Mr. Miller. "We had this creative a-ha moment when we found a quote by Ruth Handler, Barbie's creator, saying that she created Barbie to show girls that they had choices."

Kristina Duncan, vp-marketing communications for the Barbie brand, said millennial parents are more likely to respond to brands that stand for something. "The relationship between parents and kids is different than 10 years ago, the connection is much stronger," she said.