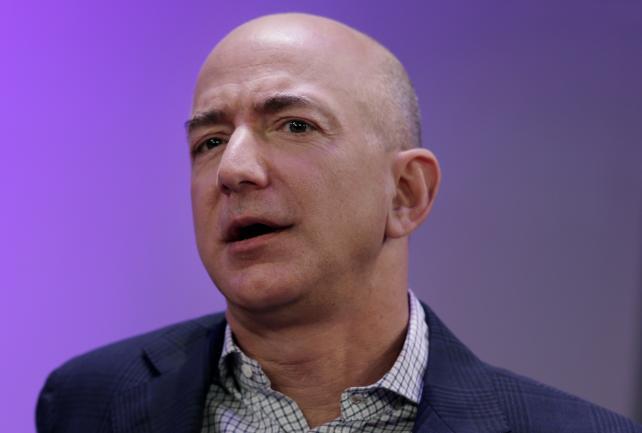 Jeff Bezos and Donald Trump took shots at each other via Twitter during the presidential campaign.
Credit: Peter Foley/Bloomberg

An invitation to the meeting went out last week from members of Mr. Trump's transition team, including venture capitalist Peter Thiel. Oracle co-CEO Safra Catz, Cisco Systems' Chuck Robbins and Facebook Chief Operating Officer Sheryl Sandberg plan to attend. Alphabet's Larry Page and Eric Schmidt will be there too, as will Apple's Tim Cook, according to people familiar with the matter. IBM CEO Ginni Rometty -- who is on Trump's advisory panel of business leaders -- will also attend, said a person familiar with her plans.

While support for Trump was thin among technology executives during the presidential campaign, Mr. Bezos and Mr. Trump clashed the most publicly. The Amazon founder mockingly tweeted that he would send the Republican candidate to space on one of his rockets, and Mr. Trump accused Mr. Bezos of purchasing the Washington Post to gain political influence in the nation's capital to help his growing e-commerce empire.

Mr. Bezos is doing the responsible thing for Amazon shareholders in attending the summit even though it promises to be a "groveling session made for reality TV," said Michael Pachter, an analyst at Wedbush Securities Inc.

"Bezos has to participate because he and his company were singled out," Mr. Pachter said. "He has to be honorable and protect his shareholders."

Technology leaders in Silicon Valley and beyond had openly signaled an uneasiness with Trump, with most favoring Hillary Clinton -- contributions to her campaign were 114 times the level they were for Trump, according to statistics compiled by the Center for Responsive Politics. Over the summer, a group of about 140 industry figures sent an open letter decrying Trump's views on immigration, internet security and government investment, which they said would stifle innovation and growth.

The meeting with Mr. Trump, scheduled for 2 p.m. on Wednesday, will likely focus on possible repatriation of overseas earnings and corporate tax reform, said Rob Atkinson, president of the Information Technology and Innovation Foundation.

Cisco's Mr. Robbins said those issues are among "pretty important potential changes we could see in the corporate arena" under Trump.

Speaking at the company's annual shareholder meeting in response to a question about how a change in repatriation rules or tax reform would affect Cisco's strategy, Mr. Robbins said a shift on bringing back foreign earnings is "not being positioned as a tax holiday. It would be a permanent solution which we would be very happy with."

A lower tax rate is "where I think the jobs get created," he said. "So we're optimistic and we'll see how it plays out."

Mr. Atkinson said the meeting may address China, where several U.S. tech companies have struggled to find a foothold. Recode reported earlier that Ms. Sandberg would be there and that Bezos was likely to attend.

The gathering will also be a chance for tech's leaders to find some common ground with the new administration.

Mr. Bezos and Mr. Trump have had a long-running spat, played out largely via Twitter, beginning last December after the candidate attacked the Washington Post for publishing unflattering reports about him.

"The Washington Post, which loses a fortune, is owned by Jeff Bezos for purposes of keeping taxes down at his no profit company, Amazon," Mr. Trump said.

In June, Mr. Trump's campaign revoked the Post's press credentials, accusing the newspaper of being a front for Amazon's political agenda. The newspaper later was the first to report on the "Access Hollywood" footage from 2005 of Mr. Trump making lewd comments about women.

Following Trump's victory in November, Mr. Bezos sought to strike a conciliatory tone, tweeting, "I for one give him my most open mind."

Mr. Musk's attendance brings a triangle of tension to the meeting. He and Mr. Bezos are both tech moguls who made their fortunes on the internet and then plowed them into space exploration. The two have sparred publicly via Twitter about the accomplishments of their space exploration companies: Mr. Musk owns Space Exploration Technologies and Bezos owns Blue Origin, which are both trying to advance space exploration with rockets that can be reused like airplanes.

Mr. Bezos's first-ever tweet celebrated Blue Origin sending a rocket to the edge of space and landing it back on Earth. Mr. Musk initially offered kudos, then in a subsequent message said: "It is however, important to clear up the difference between 'space' and 'orbit'" to highlight the current technology gap between the two ventures.