Need to Check Your Cholesterol? There Will Be an App for That | Ad Age
Skip to main content

Need to Check Your Cholesterol? There Will Be an App for That

For Pharma Marketers, the IPhone Is a Perfect Conduit to the Consumer
READ THIS NEXT
How Triller rose from the hype to become TikTok's most dangerous rival 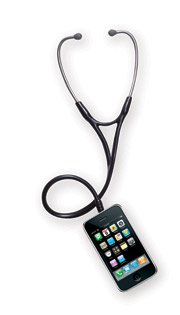 As Apple prepares to roll out the latest iteration of its mega-popular iPhone later this summer, it and outside developers are rapidly morphing the phone into a diagnostic device for both consumers and medical professionals. The ubiquity of the iPhone -- 30 million sold since 2007 -- and the popularity of its apps -- more than 1 billion have been downloaded -- is leading companies such as Johnson & Johnson, as well as third-party developers, to make and market medical applications for the phones, such a feature that will allow patients to verify what procedures their insurance covers.

"This is a seminal moment for the pharmaceutical industry," said Tim Gee, principle of Beaverton, Ore.-based Medical Connectivity Consulting. "The trend to incorporate more medical devices into consumer electronics is going to explode." Added Dr. Michael Ostrovsky, an editor for MedGadget.com: "If you look at what the iPhone can offer both patients and clinicians, it's truly an untapped market."

It's also fertile ground for marketers of medical products and prescription drugs aimed at medical professionals and consumers. "The app is the new 'let's build a website' when we're presenting tactical plans," said the head of one pharmaceutical ad agency. "That's absolutely true," said Michael Guarini, the president of New York-based health-care agency Flaum Communications. "I talk to clients all the time about mobile technology. We use the term 'smartphone,' but the iPhone is ahead of everybody else."

Among the existing 35,000 applications for the iPhone -- paid and free -- there already exist more than 500 medical apps, mainly used by health professionals for things such as checking normal lab values, which allows interpretation of test results; finding out what the drip rate should be for an intravenous drug infusion; and looking up definitions of medical terms.

New opportunities
But when Apple unveiled its 3.0 software-development kit in March, it was if the floodgates had opened for the medical industry at large. As part of its presentation, Apple clearly targeted the industry and showed how pharmaceutical manufacturers might use the iPhone's new external-accessories application to do things such as hook up a blood-pressure cuff to the iPhone and take someone's pressure.

In a rather impressive display from that unveiling, LifeScan, a Jonhson & Johnson company that makes diabetes products, introduced a prototype for an application that would allow diabetics to interface their glucometers (which track blood-sugar levels) with the iPhone. The glucometer would measure a consumer's sugar, and the iPhone app would interpret and chart the results, calculate sugar intake during meals, and allow the user to better adjust his or her diabetes medications and diet accordingly.

"Apple contacted us about three weeks before their presentation and asked us if we were interested in putting something together based on their new software," said Dave Detmers, director-communications for Milpitas, Calif.-based LifeScan. "We were very interested in this. We see a lot of potential in terms of being able to add these types of applications on these devices, and Apple sees an opportunity for broader applications in the medical field."

Mr. Detmers stressed that LifeScan's demonstration at Apple's March presentation was a prototype but quickly added, "We think there's a tremendous opportunity there. Because devices like the iPhone are becoming so ubiquitous, it only makes sense. Apple has sold 30 million iPhones; there are 24 million diabetics in this country. That's an intersection of quite a number of people. The issue is: Where can you bring value? What tools do people want and where do they want them? People are looking for ways to manage their diabetes, and if you can help them interpret blood glucose levels and make smart decisions, it's a no-brainer. Let's face it: The iPhone has a very unique user interface, and is a very popular and intuitive device."

But can a $1.99 app create brand loyalty between Big Pharma and little consumer? "Absolutely. The possibilities are endless," said Flaum's Mr. Guarini, a onetime marketing director at Bristol-Myers Squibb. "You could do lead-in and lead-out billboards before the app, just to give some recognition to the company. You could also develop a database. If you were somehow able to capture a database, you could have a relationship with that customer aside from the app. The pharma company could then use it to pulse out reminders on medications, doctor visits, all kinds of things."

IPhone apps have become so important to Georgetown University that it is requiring students in the second year of med school to use an iPhone or an iPod Touch (the cost is built into the tuition), while Ohio State University last year said it would give every student in its medical school an iPod Touch.

For consumers, there are apps such as one from Canopy Financial, a San Francisco-based health-care financial-services company. The Mobile Consumer Directed Healthcare application for both the iPhone and the iPod Touch was introduced in mid-May and is designed for those with health-care savings accounts, health-reimbursement accounts and flexible-spending accounts. It lets people?search medical procedures using keywords to determine if these procedures are eligible to be paid for out of their accounts. It also provides links to maps of local providers of the procedures, and what the cost/co-pay will be. The app costs $4.99.

For Big Pharma, the opportunity is clear. A consumer who tests positive for high blood pressure or diabetes via the iPhone will clearly be a marketing target for prescription medications or ancillary medical services. And the pharmaceutical industry is just now coming into its own when it comes to digital marketing. The industry devoted 36% more of its ad dollars ($137 million) last year to internet spending at a time when overall spending fell nearly 11% to $4.7 billion, according to TNS Media Intelligence.

"A lot of what's driving this is we are moving to a state of cost shifting in health care," said Loreen Babcock, CEO of Omnicom Group's Unit 7, a relationship-marketing agency. "As more and more costs shift to consumers, as co-pays rise, as premiums rise, more and more is being forced on the consumer. As you see this over time, now consumers need to become aware of what their options are. When insurance pays the majority, you may not feel inclined to search out alternatives. When the consumer is paying the majority, they're going to look elsewhere, and these applications are incredible. They're creating more of an ongoing social engagement or connection between physicians and patients, which is exactly what pharma is looking for in social media."

New medical device?
One potential roadblock is the Food and Drug Administration, which did not respond to a query by press time but is sure to be looking at one key question: At what point does the iPhone or any other smartphone turn from a communications device to a medical device, and therefore fall under FDA regulations?

For instance, a consumer could hook up a blood-pressure cuff and take a reading for his own knowledge, and Apple would be OK. But if the consumer then took the next logical step and passed the results on to a health-care professional, the iPhone could be considered a medical device. "The FDA certainly has its regulations around labeling, intended use and the marketing claims you make about your device," Mr. Gee said. "It will be interesting to see how this plays out."

"It's uncharted ground for the FDA, and it hasn't been thought through -- but it will be," Ms. Babcock said. "If I were to bet on this, my guess is that [the iPhone] will not be considered a medical device. But it's going to be messy for a while as they sort it out. The FDA just doesn't have a clear line of definition when it comes to social media."