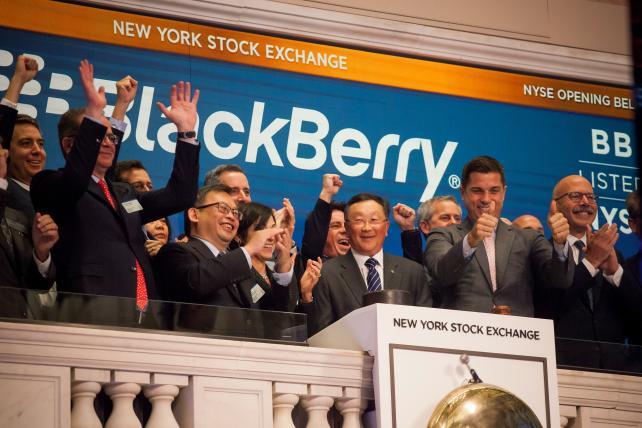 BlackBerry Ltd. jumped after reporting record software revenue and saying sales for the full year would come in at the high end of its forecast.

The Waterloo, Ontario-based company said sales from enterprise software and services rose 11.5 percent to $97 million in the quarter ended Nov. 30, boosted by some 3,000 orders from customers including NATO, the U.S. Department of Justice, the Dutch government and Deutsche Bank AG.

"We really do have a lot of people that want to do business with us," Chief Executive Officer John Chen said in an interview. The shares gained as much as 14 percent, to $12. 36 at 9:45 a.m. in New York, the biggest intraday increase since Sept. 28.

Overall revenue is still declining year over year, but today's BlackBerry looks a lot more like the high-margin software company Chen has been crafting since taking over the company four years ago. Its central software products, which help companies and governments manage and protect their employees' mobile devices, faces steep competition from established companies like International Business Machines Corp. and VMware.

After years of firing hardware engineers, BlackBerry's employee base now looks like a software company, with about 1,200 salespeople in the field trying to get new customers to sign up. BlackBerry said Wednesday that the company expects to come in at the top end of its forecast for full-year 2018 revenue of $920 million to $950 million.