The labels Twitter uses on Donald Trump’s claims of voter fraud are now appearing in memes, and brands like Oreo and Burger King are adding their own flavors
READ THIS NEXT
Fired Sherwin-Williams paint enthusiast and TikTok star joins rival firm to develop new paints 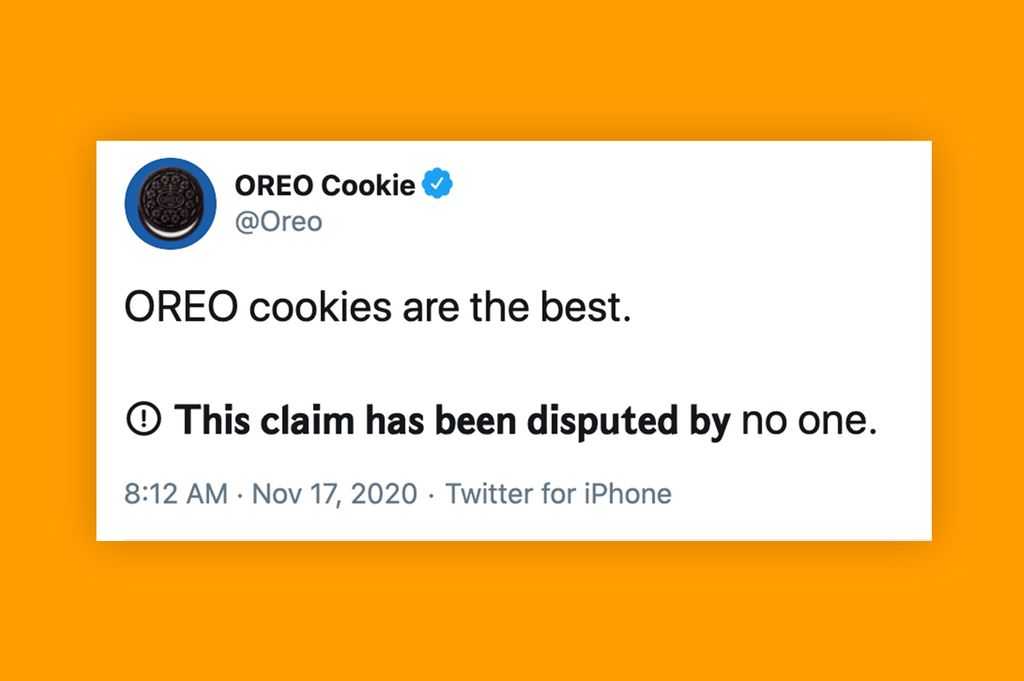 The latest Twitter meme has been brewing for some time. This past summer, Twitter began putting flags on sitting president Donald Trump’s tweets, warning users that his messages of voter fraud and claims about mail-in ballots might not be entirely accurate.

Ever since the election results made Joe Biden president-elect, Trump’s declarations of voter fraud have only increased and Twitter has been using a new label on many of Trump’s unsubstantiated tweets: “This claim about voter fraud is disputed.”

On Monday, The Daily Show was one of the first to point fun at Twitter’s relentlessness:

Since then, the meme form has evolved with people placing the label on their own tweets on topics outside the realm of voter fraud. Brands saw an opportunity to take part in the pop culture conversation, even with the meme’s political nature. Brands, especially food brands like Oreo, Burger King and Snickers, have added their own humor, often saying that their statements are actually not disputed by anyone.

While Twitter might not enjoy the fact that people and brands are turning its labels into a meme, brands shouldn’t worry about taking part in the fun—a Twitter spokesperson says the memes do not violate any of the platform’s policies.

me: do you want anything from BK?

her: no thanks I’m not hungry

following everyone who replies to this

brands are your friend

We need to make a *This claim is not disputed* tweet, so people will know we’re hip. Any ideas?

I didn’t eat your fries!

!⃝ This claim is disputed by official sources

Time passes at a normal rate during a Tabata class.

WE'RE GOOD AT OUR OWN GAME

You can't just shoot a hole into the surface of Mars.

ⓘ Official sources stated that this is false and misleading pic.twitter.com/UXBOOM7aF4

LEO MESSI IS THE GREATEST PLAYER OF ALL TIME!