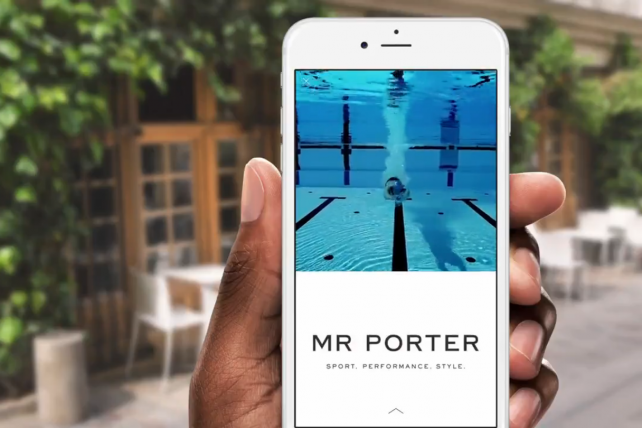 Mr Porter is among the first brands to test Facebook's iAd-like unit.
Credit:

Facebook sought to dazzle the creatives at the Cannes Lions this year with a new type of mobile ad that's more of an app than an ad. And now it's ready to show those ads to people who weren't at the annual advertising gathering.

On Thursday, Facebook began testing the new mobile ad format that offers a blank creative canvas for brands to turn their ads into something closer to an app, similar to the Instant Articles editorial format that Facebook has been testing with publishers like The New York Times and National Geographic. As with the Instant Article formats, the ads being tested actually live within the Facebook app -- versus loading an external web page -- which makes them load faster whether someone's on wifi or a cellular connection.

"We look forward to seeing how marketers use this surface to create compelling experiences for people and drive key objectives, including brand affinity and direct response," said Facebook's Director of Ads Product Marketing Kelly Graziadei in an emailed statement.

The ads look like a normal Facebook news feed ad when initially displayed in the news feed but, once clicked, take people through the looking glass. When people click on the ad, they'll open what appears to be a souped-up web page that can include full-screen videos, photo carousels and interactive elements like images that let people swipe around to see different angles of a product. Brands aren't able to sell products within the ads but can include links to product pages that will open up a mobile site, a Facebook spokesman said.

All of those bells and whistles may sound familiar. The late Apple CEO Steve Jobs had pitched a similar creative canvas for brands on mobile when he unveiled the app-like iAds in 2010. And Microsoft pushed its own app-like ad prototypes at Cannes in 2013, though the company has since dialed back its advertising business by outsourcing ad sales to AOL earlier this summer.

Gatorade, Michael Kors, Mr Porter and Carrefour Spain are the first four brands to test the new formats. The Facebook spokesman said there's no timeline for an official roll-out and for now only a small number of people accessing Facebook's iPhone and iPad apps will actually see the ads in the wild. For everyone else, take a peek at two of the initial campaigns below that demonstrate how the ads can be used for a branding campaing in Gatorade's example or for direct-reponse purposes as in Mr Porter's.