More Than Just Numbers: The Brands With the Top Relationship Quality on Facebook

Standouts YouTube, MTV Show Engagement Just as Important as Fan Counts
READ THIS NEXT
TikTok tactics: What to know about reaching audiences on the social media platform

On Facebook, like in life, it's not enough for someone to say he loves you. He has to prove it.

In Fathom Analytics' new Relationship Quality Index, the top-rated brands on Facebook tend to be the ones with the most likes. YouTube (48 million likes), MTV (29 million), Coca-Cola (36 million), Starbucks (26 million) and Disney (29 million) make up the top five. But because of other factors, such as engagement and emotion, those brands don't fall in precise order of fan counts.

So Starbucks, even though it trails Coca-Cola by 10 million fans, is behind by only one point -- 87 to 86 -- in RQI, thanks to superior engagement and sentiment for the company. Likewise, the java giant beats Disney by two points -- 86 to 84 -- even though it trails by about 3 million fans. Further down the ranking, Kohl's (6 million fans) is a respectable No. 31 on the list, with a 77 RQI, thanks largely to coming in first among all brands on Facebook in fan emotional sentiment. Kohl's actually over-indexes on all emotional scales -- including frustration and hate -- compared with other brands on Facebook, but fans show it the love by a significant margin.

Fathom Analytics, a subsidiary of social-media analytics firm Motivequest, bases its rankings on four factors that get equal weight: The brand pages' number of fans, their momentum (based on how quickly they've been acquiring fans lately), fan engagement (or how often they post on or interact with pages) and emotional quality (or how much and how positive emotion is expressed on comments).

In measuring the fourth factor, MotiveQuest initially provided a semantic analysis system used by the Department of Homeland Security to track and monitor sentiment on the web, said Chief Technology Officer Brook Miller. It has evolved into a tool for ascertaining how likely someone is to be loyal to Dove vs. Olay, for example, than how likely someone is to strap on an explosive vest.

In the ranking, Walmart Stores (11 million fans) essentially ties with Red Bull (24 million) and PlayStation (18 million fans), all with an 83 RQI, thanks to momentum, engagement and emotion. Walmart has been building its fan base aggressively of late and activating it more through such programs as My Local Walmart , which matches fans with their local stores, or Shopycat, a Facebook app people can use to get gift ideas for friends. 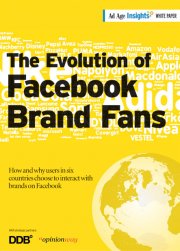 Based on a new survey by DDB and OpinionWay, this white paper looks at the changing attitudes and habits of Facebook fans in six countries: United States, United Kingdom, France, Germany, Turkey and Malaysia. Attitudes toward privacy concerns as well as features such as games, Facebook Places, messaging and shopping are also explored.

In general, love beats hate five-to-one in sentiment on pages, which shouldn't be surprising given that fans are likers of the brands. But that proportion was roughly reversed in the case of Lowe 's, whose recent decision to pull ads from TLC's "All-American Muslim" generated a lot of emotion on its Facebook page that was mostly at the hate end of the spectrum, Mr. Miller said. That's one reason it didn't crack the top 100 list, though it also has only 785,000 fans.

With apologies to the Beatles, it is possible to buy love on Facebook. Procter & Gamble Co.'s Tide absolutely destroys all competition in the cleaning category, placing 36th among brands overall, with a 76 RQI, and beating its nearest cleaner-brand peers by at least four-to-one. An analysis of conversation on Tide's fan page shows a coupon offer to be the hottest topic for the brand, which ranked No. 3 in momentum overall for recent fan acquisition, Mr. Miller said. In fairness, though, Tide (with 2 million fans) also had considerable discussion among fans about such topics as how to get hot-chocolate stains out of leggings.

In terms of momentum, Facebook relationships have some real-world correlation. Wendy's , for example, apparently poised to overtake Burger King as the No. 2 U.S. burger chain, topped all brands in Fathom Quest's momentum measure of fan acquisition, having more than quadrupled its fan count to more than 9 million since September. Then again, Burger King wasn't far behind, at No. 6 on the momentum chart.