IPad-only Pub Has 120,000 Active Weekly Readers and Is Getting a Boost From Burgeoning Device Market, But Is Still a Long Way From Viable Biz
READ THIS NEXT
Why data will change health care as we know it

Can you build a general-news publication exclusively for tablets and gain an audience of paying subscribers?

That was Rupert Murdoch's gamble seven months ago when he launched The Daily, the first (and still only) "iPad newspaper." It was a $30 million bet on both the tablet as a medium and the public's willingness to pay for news.

Today The Daily has 120,000 active weekly readers, 80,000 of whom are actually paying for the app, according to Publisher Greg Clayman. The bigger number includes 40,000 non-paying readers on a two-week introductory trial period. About 15% of people who sign up for a trial ultimately end up subscribing, he said. "The numbers are telling us people are responding well to original content designed for the platform. Premium content seems to work well on a tablet device." 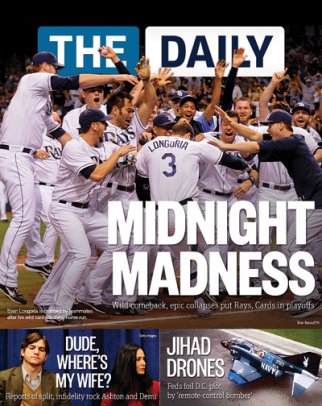 With heavy graphics and short stories, The Daily is more like USA Today or People magazine.

But The Daily still has a long way to go before it proves anything about paid media or the tablet. While its subscriber rolls remain well short of the 500,000 paying readers that Mr. Murdoch said would make it a viable business, Mr. Clayman said the company views it as a multiyear project to bring a new brand to profitability, like a magazine launch.

The Daily's numbers put it in the ballpark with some established print brands' digital editions. The New Yorker, for example, has 26,880 iPad-only subscribers paying $59.99 a year, among 135,571 total iPad edition readers, a group that includes print subscribers who have activated their free tablet subscription. Overall the magazine has 189,154 paying digital readers across devices and platforms, including print subscribers who activated digital access, new iPad subscribers and Kindle readers.

"It's still very early in the process, and it's still only an iPad application," said Mike Vorhaus of consulting firm Frank N. Magid Associates. "I think they could get to 300,000 to 350,000 on just one device."

While the iPad has grown beyond anyone's expectation, it is still just one device, among increasingly many. Mr. Clayman said The Daily is getting close to releasing an Android version, which has to be developed for several different screen sizes, including the 7-inch Kindle Fire revealed by Amazon last week.

So far, The Daily's advertisers view it as an experiment in the tablet format.

"I think there is a lot of value in testing and learning in tablet editions," said Robin Steinberg, exec VP at MediaVest, a unit of Publicis Groupe . "The Daily, to me, is People-meets-the New York Post; it's kind of a magazine, kind of a newspaper. They have a large user base that is daily, not weekly or monthly, with some interesting engagement metrics."

The Daily's readers spend an average of 20 to 30 minutes with the app each day, and view 40 pages, according to metrics from Localytics. The Daily publishes about 120 pages per day, including ads, videos and graphics.

While some marketers were eager to be part of a buzzy launch, however, renewing deals is a harder sell.

"It's no longer a beta opportunity, so the question is , "Is this moving the needle for my business?'" said Andrea Redniss, managing director at Digital Media Storm. "It's very difficult to quantify that and lot of major marketers still have big questions about it."

On the other hand, The Daily appears to be benefiting from an emerging characteristic of the tablet ecosystem, one that has many in media and retail excited: People are more willing to buy things -- including subscriptions -- on a tablet than on a PC.

Among The Daily's own subscribers, the early surprise is that the majority have chosen the $39.99 annual subscription over the recurring 99-cents-per-week subscription. That has helped keep churn, or the rate at which people dump service, relatively low, between 1% and 3% a week, Mr. Clayman said.

While only 5% of U.S. consumers say they would pay for electronic subscriptions to "news" or "newspapers," the percentage for iPad owners was 12%, according to Magid.

And yet another surprise: The Daily's subscribers don't all live on the East Coast or West Coast. (See the map below; circles aren't precisely proportionate to the number of readers.) "We assumed they would be early-adopters, but people buying these devices aren't just on the coasts, they're all over the country," Mr. Clayman said. "People are using these devices to get their news on the couch, in bed. It's a natural connection to a product like ours."