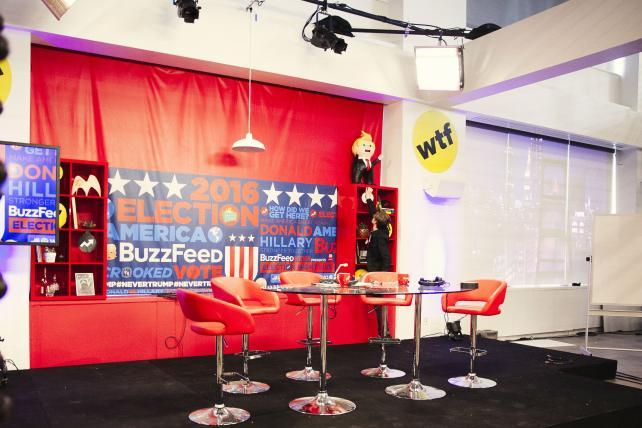 Election coverage 2016 is full of digital firsts, like perhaps the first Twitter-fueled campaign courtesy of Donald Trump. But live-streaming video has the potential to be the most transformative.

BuzzFeed is one of those new media voices ready to morph into a live broadcaster on Twitter to report results, taking on traditional cable news, which is only possible because platforms have moved quickly to embrace streaming video.

BuzzFeed picked Twitter for its live-streaming election night, giving the messaging service a victory for its video product, which it is counting on to revolutionize the platform in the coming years.

"Twitter is the heart of political conversation in America," said BuzzFeed editor-in-chief Ben Smith, explaining why the site chose the social platform over Facebook or YouTube.

Twitter has channeled its real-time advantages into video, and it now streams pro-football games and Bloomberg media, among other digital shows.

Facebook, for instance, has paid publishers like BuzzFeed to bring content to the platform, and the publisher was the first to live-stream a branded video on the social network with a paid sponsor.

BuzzFeed will show commercial breaks during its live Twitter broadcast, and Twitter is handling the ad sales and insertion, Mr. Smith said. A Twitter spokeswoman said Izod was among the sponsors, but declined to comment further for the story.

"It feels to me that this is the biggest Twitter moment ever," Mr. Smith said.

BuzzFeed will get to promote its food site, Tasty, during the live stream, Mr. Smith said. Tasty producers will be cooking on set to feed the party around the coverage. Also, its political reporters will be on staff, along with guests like former Republican presidential candidate Ben Carson.

The audience size won't be known until Wednesday, but there are signs that political coverage is a major draw on Twitter. After the second presidential debate, Twitter said there were 17 million tweets around the debate, which was more than the Super Bowl this year.

A live stream of the second debate drew 3.2 million viewers, which was on par with what the site sees for NFL games. Twitter did not release results of the third debate.

Twitter is still small compared with Facebook or even Instagram in terms of daily users. It has 317 million monthly users, while Facebook claims 1.8 billion, and almost every major media company will have a presence on Facebook's live video service for the election.

The most advanced technology they'll have? "Magnets," Mr. Smith said, which they'll use to slap on the map as winners are called. "It's really analog."

As for the conversation itself, Twitter displays tweets from everyday users alongside the live stream. The site has been working on curating conversations with algorithms so it can weed out any unsavory actors chiming in, which has been a problem for the platform.

Mr. Smith said he isn't worried about the potential for bad manners. Besides it's not just online trolls poisoning the conversation.

"Some of it comes from the candidates themselves," Mr. Smith said.