Baby, It's Cold Out There: Canada Goose Rolls Out Direct-to-Consumer Strategy

Dani Reiss, who runs Canada Goose Holdings Inc., used to be so anti-logo that he would cut the little crocodiles off his Lacoste shirts. Today, a prominent North Pole crest is emblazoned on the shoulder of each parka his company makes, enhancing their cachet with consumers as Amazon.com Inc.'s shadow looms large over the traditional retail landscape.

"I didn't like brands, which is very ironic I realize given our large logo," Reiss said in an interview from Canada Goose's Toronto head office. "What I learned when I started working here was that the stories behind these products were phenomenal, the reputation we had built was phenomenal, anybody who knew about it really liked it—but nobody knew about it."

Canada Goose turns 60 this year, but as a hot consumer brand it's a relative youngster. After selling through wholesalers for most of its history, it's only just beginning to roll out its direct-to-consumer strategy. The company is doing this in the midst of a growing threat from Amazon and declining mall traffic, giving it the ability to tailor its approach to the changing retail reality. Its strategy: rapid growth of e-commerce bolstered by a few flagship stores that Reiss says will help close the 15-point profit margin gap with its luxury peers. 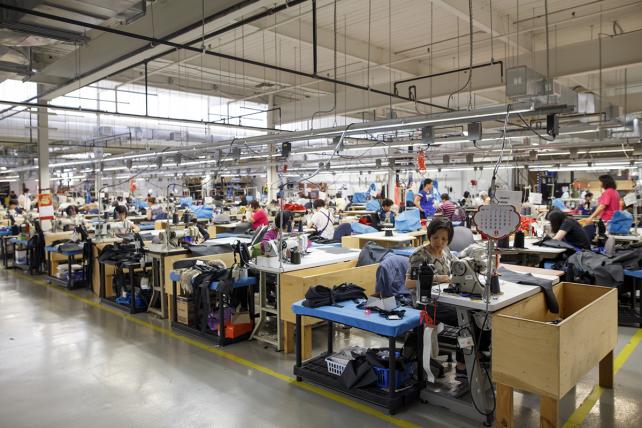 A Canada Goose factory in Toronto.

The direct-to-consumer approach has the added advantage of reducing Canada Goose's reliance on the struggling retailers that accounted for all of its sales just three years ago. Department store chains like Hudson's Bay Co.'s Saks Fifth Avenue, Bloomingdale's, Harry Rosen and Holt Renfrew are at the front lines of Amazon's assault on the industry, which has been forced to shutter stores and lay off employees amid declining mall traffic. This summer, Amazon said it would launch a service called Prime Wardrobe that lets consumers try on items at home before they buy, causing department-store shares to slump.

"There's no doubt that the wholesale landscape today is languishing," said Reiss, who has been chief executive officer of Canada Goose since 2001. He's the third generation of his family to run the company, founded by his Polish immigrant grandfather in 1957.

He emphasized that Canada Goose still has a strong relationship with its wholesalers, while its popular outerwear and new line of knitwear are attracting shoppers in department stores. But Reiss believes the direct-to-consumer category, which accounted for 29 percent of Canada Goose's revenue in the fiscal year ended March 31, will grow faster and could one day overtake wholesale as the biggest source of sales.

"It's more clear to me today than ever how big that opportunity is," he said.

The pillar of its consumer strategy is e-commerce. Canada Goose has four country-specific sites -- in Canada, the U.S., U.K. and France—and plans to roll out seven more European sites this year with a plan to eventually be "online everywhere around the world," Reiss said.

Canada Goose is supplementing that online presence with a smattering of flagship stores. So far it's opened two, in Toronto and New York. Four more stores -- in London, Chicago, Boston and Calgary—are coming this year with a goal of 15 to 20 worldwide by 2020.

"We have been very disciplined over the last 20 years in every decision we've made," Reiss said. "We're going to apply the same discipline with our real estate decisions to make sure we don't sign any leases that we're going to regret in a few years."

Analysts are encouraged by the potential growth trajectory of Canada Goose, which has seen its shares gain 42 percent since its trading debut in March, boosting its market value to C$2.58 billion ($2.16 billion).

"Canada Goose is the first ever hyper-growth softlines brand to arrive fully in this new digital era, and it should be amazing to have front-row seats to watch what happens when you incubate one of these young rocketships in a totally digital landscape," Evercore ISI analyst Omar Saad said in an April note initiating coverage of the retailer.

Saad estimated that Canada Goose's e-commerce sales already account for more than 20 percent of its total revenue, up from zero in 2014. This is well ahead of Burberry Group Plc, which has the next highest digital penetration of the luxury brands at 10 percent.

That has big implications for Canada Goose's gross margin, which was 53 percent in the fiscal year ended March 31. By contrast, Moncler SpA's was 77 percent in its last fiscal year, while Burberry, Hermes International and LVMH Moet Hennessy Louis Vuitton SE ranged from 65 percent to 70 percent.

A direct-to-consumer jacket sale provides two to four times more operating income than a sale of the same product through a wholesaler, according to Canada Goose's annual report. Revenue in the direct-to-consumer channel more than tripled in the 12 months ended March 31, compared with 12 percent in the wholesale channel.

"We believe that the shift of a greater percentage of our business to direct-to-consumer will be one of the things that helps improve our margins, for sure," Reiss said.

To pull this off, Canada Goose needs to maintain the cache that has consumers across the northern hemisphere willing to spend up to $1,495 on its made-in-Canada parkas. For most of its history Canada Goose was a utilitarian brand, selling practical winter gear for use in the Far North.

"We made a best-in-class product but nobody really knew about it outside of the people who lived and worked in those places," Reiss said.

Reiss, 43, who joined the company in 1997, recognized its potential to be more than just a maker of utilitarian outerwear and became obsessed with the idea of brand authenticity.

He tried hard to raise Canada Goose's profile in Toronto but everyone told him the products were too utilitarian, too expensive, or both.

"But when I traveled to Europe I found that in Europe they really understood it," he said. "They're like, 'Oh, this is a parka made in Canada that is used in the coldest places on Earth by anybody who knows. This is almost the platonic image of a winter jacket."'

Canada Goose's jackets took off in Stockholm first and quickly spread to Italy, Germany and even Japan but took longer to take root in their home market.

"In typical Canadian fashion, Canadians adopt their own things after everybody else does," Reiss said.

Canada Goose's next big frontier is China, where many upscale consumers are familiar with the brand through their travels.

"We're working on a China strategy as we speak," Reiss said. "China's a huge potential market for us."