Cardi B to help YouTube with marketing blitz for music service 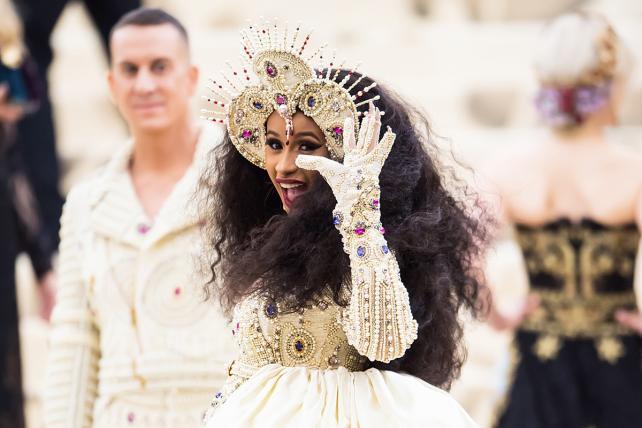 Rapper Cardi B at the Costume Institute Gala at The Metropolitan Museum of Art on May 7, 2018.
Credit: Photo by Gilbert Carrasquillo/GC Images

YouTube will soon debut a revamped music-streaming service to challenge Apple Music and Spotify Technology SA. And the Google division is willing to spend heavily to tell the world about it -- including getting hip-hop star Cardi B to help.

For the service, the video arm of Alphabet Inc.'s Google is readying its largest marketing effort ever, a bid to win new, paying consumers and generate revenue beyond digital advertising. That promotional push is also driven by a need to revive a YouTube brand that's been tarnished by a series of public controversies over inappropriate videos.

Next Tuesday, the company will unveil YouTube Music, a two-tiered subscription service charging consumers for ad-free music and video, including YouTube's original programming. Landing with the service is an enormous ad blitz.

"This will be the biggest marketing spend YouTube has done to-date," T. Jay Fowler, a product director for YouTube Music, told Bloomberg News. He declined to share the amount, but YouTube has run sizable campaigns before, including buying prominent billboard space to promote home-grown stars.

That blitz will include prominent spots on YouTube's website, timed around popular music videos and events. YouTube plans to work with Cardi B to promote the service, according to a person familiar with its plans. Another person said the company will also buy TV ad spots to run during major live sports events, like recent promotions for the YouTube TV service. The people asked not to be identified discussing private plans. A YouTube spokeswoman declined to comment.

YouTube has made several attempts at converting its tremendous user base -- the company says that 1 billion music fans use its free, ad-based video service a month -- into a subscription business. The company hasn't shared its number of paid subscribers. Spotify recently said it reached 75 million paid users. Apple Inc. has more than 40 million paid subscriptions and a total of over 50 million users -- a number that includes free trials.

YouTube Music is the company's attempt to package its previous streaming forays into one place. And the marketing campaign is a chance to clear up confusion. Consumers can get YouTube Music for free, or pay $9.99 a month for an ad-free version with other benefits like downloads (YouTube Music Premium). There's a third option, YouTube Premium for $11.99, which includes the premium music service plus access to ad-free video including in-house shows like Cobra Kai. That's a redo of a previous offering called YouTube Red.

Google also has another music streaming service called Google Play Music. Existing subscribers to this offering will get a YouTube Music Premium membership as part of their your subscription each month. "And if you use Google Play Music, nothing will change," YouTube added in a blog.

Don't confuse all these with YouTube TV, the company's offering for over-the-top television.

The new YouTube paid services will also help Google improve its relationship with the music industry, which has been hostile in the past. Lyor Cohen, head of YouTube Music, said the company spent the last year rebuilding ties with record labels and artists. "We heard them loud and clear," he said. "They wanted two engines in their plane. They wanted ad-supported and subscription."