Softcard, the mobile payment company formed by three of the largest national phone carriers, has found rocky going so far. Now it's plowing in $1.5 million for a national marketing debut to smooth its path.

The company was born in 2010 as Isis mobile wallet, a joint venture among Verizon, AT&T and T-Mobile. But it failed to gain consumer adoption even after going national last year; analysts blamed bad marketing and arguably premature timing.

Then in September, Apple jumped into mobile payments with Apple Pay, simultaneously legitimating the arena and overshadowing all other contenders. On Sept. 3, the Isis mobile wallet changed its name, to avoid evoking the Islamic military group that arose since the venture first formed.

Softcard, as the telcos' venture is now known, was actually planning a new digital marketing campaign before Apple entered the market, said Softcard CMO Cie Nicholson, a former CMO for PepsiCo. The new attention is only a bonus.

The new effort stars Tappy, a chatty, big-eyed muppet shaped like the payment point-of-sale terminal Softcard uses and build by Jim Henson's Creature Shop. In one video, which will run online, he timidly begs a McDonald's employee to sing the restaurant's familiar anthem. McDonald's announced its compatibility with Softcard last month. The campaign will also highlight Softcard's relationship with Subway. 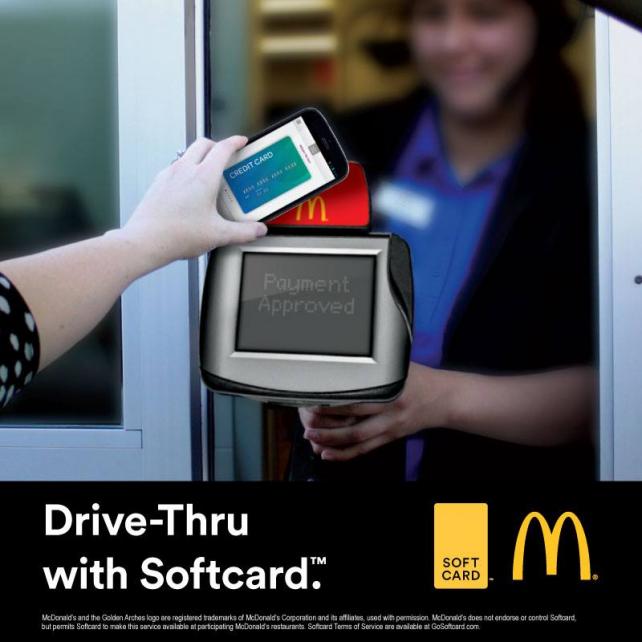 Previous promotions for digital wallets have largely focused on how cumbersome their analog, leather forebears are. But Ms. Nicholson concluded that was a losing tactic. "People don't hate their wallet," she said.

"Tappy allows us to pretty cleverly showcase our product, and our partners, in a way that feels natural and unforced," Ms. Nicholson said. "It's fun, it's social and it's very shareable."

Camp & King, a San Francisco agency under Havas Worldwide, designed the campaign. Softcard is spending around $1.5 million on the initial six-week phase of the effort, whose ads will run primarily on mobile platforms and social media, the company said.

Each of its founding carriers signed off on the campaign, Softcard said, but they are not contributing their massive marketing budgets. They are lending their branding; Softcard intentionally avoided color in its new logo so its backers could use it in targeted ads.

When Softcard went national last year, its chief rival was Google Wallet, but both were limited by Apple, which had not enabled near-field communication technology on the iPhone. Without iPhones, retailers were reluctant to install the NFC terminals on which Softcard relies.

Now everything has changed: Apple has NFC and is deploying its significant marketing capacity, along with the ad budgets of its banking and financial services partners, to promote Apple Pay. Meanwhile, MCX, a consortium of giant retailers and marketers, such as Best Buy and Walmart, is set to release its own mobile payments solution.

Apple, Softcard claims, has validated its choice of NFC technology. And the company argued it can target the roughly 60% of U.S. smartphone consumers not using iPhones. "People think of them as being very complementary," Ms. Nicholson said of her company's product. "We are happy that Apple Pay is out there."

Some industry observers believe they shouldn't be, arguing that Softcard has little competitive advantage over Apple, Google and the retailers. "I don't know why it's around," said Cherian Abraham, a mobile payment and fraud analyst with Experian Decision Analytics. "The parents haven't reconciled with the fact that it's a failure."

Softcard declined to say how many people use the product. But it argues that its long gestation will pay off in ultimate adoption. The company launched a test case in Salt Lake City, a year before going national. Jaymee Johnson, Softcard's head of marketing, said users in Salt Lake City proved three times more likely to redeem loyalty coupons through the wallet than customers nationwide.

With its first big marketing push, the company is signaling that it intends to stick around. "Tappy is not meant to be a singular campaign," Mr. Johnson said. "He is meant to be an evergreen character."