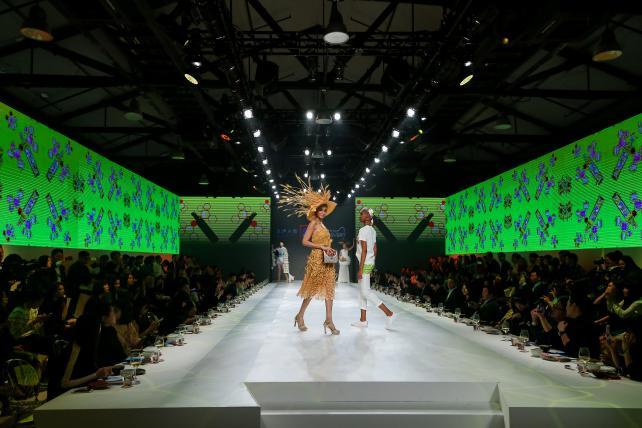 Supermarket giant Aldi made food into fashion for a runway show in China
Credit: Ogilvy Shanghai

Supermarket giant Aldi reinvented itself to enter the competitive China market. It's selling online-only, through one of e-commerce giant Alibaba's platforms. And the no-frills, low-cost German retailer also did a surprising stunt to generate buzz about its launch: It live-streamed a fashion show of couture made out of food.

Models wore a bustier covered in popcorn, a kilt embellished with cookies, a straw hat topped with long stalks of wheat. The runway doubled as a long white dinner table, with diners seated along its edges, nibbling at entrees and sipping from glasses of wine.

Western supermarket chains are trying to tap into China's soaring interest in imported food, spurred on by the rise of the middle class, their travels abroad and their concerns about the safety of local products. Since China's retail environment is challenging, particularly for big-box stores, most recent supermarket entrants are going into China online-only, as Costco did in 2014. That limits investment and risk, but it doesn't necessarily guarantee big sales.

China is the world's largest e-commerce market, and consumers are bombarded with choices. Retailers and brands have to make serious efforts to get Chinese online shoppers to pay attention to them. That even goes for huge names like Aldi, which has also made a big push into the U.S. and has over 10,000 stores worldwide.

"With Aldi coming in -- and no one in China has heard of Aldi -- you've got to do something very dramatic and very memorable to get people's attention and get people talking about it," said Graham Fink, chief creative officer of Ogilvy & Mather China, who worked on the campaign. "One way to do it is a big blockbuster TV campaign, but we don't always have money to do that. And it's nice to do something a little bit different."

Aldi and Ogilvy Shanghai, the retailer's agency of record, hired a fashion designer, a celebrity chef, a florist, a painter and a hairstylist to create runway looks using food products for the April 25 event. Some were funny or out-there. A sexy gladiator bore a shield made out of chocolate, pistachios, almonds and chocolate chip cookies. One male model wore a coat made out of clear plastic bags filled with red wine, which sloshed around as he walked.

The whole event had a very high-end feel for a discount grocery chain. Brands often shift a bit upscale when they enter China, partly because Chinese consumers are looking for higher quality when they buy foreign products.

Aldi's Chinese slogan is "handpicked for you," and the idea was that the artists handpicked the products for their designs, the way Aldi selects a limited number of products for its stores. Guests dined on the same food that was on the runway. "It's almost like you're eating the costumes," Fink said.

The event was broadcast live online; livestreaming is popular in China, and Alibaba often uses it to draw buzz to sales events. Ogilvy also gave guests a connected electronic refrigerator magnet that they can use to order Aldi's product range.

The trick for Aldi now will be sustaining the buzz, said Matthew Crabbe, Asia Pacific director of research for Mintel Group.

"It is a crowded market, getting traction is going to be difficult," he said. "There are a lot of incumbents, and it will be interesting to see how they can keep momentum up."

That's something Aldi seems aware of; announcing the partnership with Ogilvy in March, Christoph Schwaiger, country managing director for Aldi China, commented on the exciting potential of the new market and also said the retailer was "fully aware of the challenges ahead."

Aldi is selling on Alibaba Group's Tmall Global platform, which lets overseas brands sell directly to Chinese consumers. Costco is on the same platform, as is Australia's Woolworths supermarket chain and U.K. player Sainsbury's. Marks & Spencer has a storefront on an Alibaba platform, though this year it closed down all of its 10 retail stores that sold clothing and food in China. Walmart, which has over 400 locations in China, is also trying to boost its e-commerce capabilities with its local partner, JD.com, a rival to Alibaba.