Celebs Make the Most of Social Media -- on Their Own Websites

With posts about nail art, '80s movies, kittens and things made of yarn, HelloGiggles perfectly embodies the cute-girl hipster lifestyle for which Zooey Deschanel has become mascot. But since Ms. Deschanel, now star of Fox's "New Girl" sitcom, introduced the website last May, it's also become the latest example of celebrity-led, socially driven media properties seeking the attention of marketers. 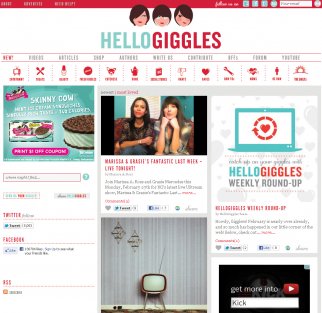 But it hasn't been easy for advertisers to leverage the presence of stars on Facebook and Twitter, no matter how vast the following. So celebrities are increasingly looking to convert those followings into audiences for media properties that they actually own.

Celeb-owned properties don't have the built-in mass of a Facebook or Twitter, but they can collect sharply defined niche audiences. HelloGiggles, for one, had almost 400,000 U.S. unique visitors in January, a group that 's 75% female and 80% between the ages of 18 and 34, according to ComScore.

But unlike, say, Oprah or Martha Stewart's publishing empires, these newest endeavors are driven by those communities, not by professionally produced content. Most of HelloGiggles content is user-generated, said co-founder and producer Sophia Rossi.

Consider that the veritable queen of social media, Lady Gaga, who has the most-followed account on Twitter, now also has her own social network. A startup she's invested in, Backplane, is building technology for niche communities, and her LittleMonsters.com is the first. On the site, which is in beta with public launch planned for spring, Gaga fans get profile pages where they can discuss tidbits such as when they first saw her in concert, a Pinterest-like venue to share photos and videos, and their own @littlemonsters.com email addresses. 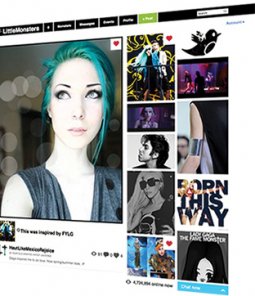 "I imagine you won't see the kind of scale you'd see on a dedicated site as you would on Facebook or Twitter, where people are anyway. Even with Lady Gaga's millions of fans, it's going to be a smaller subset," said Andy Wasef, head of mobile and emerging platforms for media agency MEC .

Gaga's is the only Backplane community so far, but the startup is gaining steam with fresh venture funding and plans to launch more communities this year. Given that Gaga has snagged brands such as HP, Wonder Bread and Diet Coke in past ventures, advertisers on her social network are sure to follow.

Celebrities have been trying to monetize their activity on the major social networks for a few years now. Startups such as Ad.ly have represented celebs such as Kim Kardashian, Snoop Dogg, Paris Hilton and Charlie Sheen to sell advertisers endorsements via tweet.

While those efforts have petered out, celeb-owned media may prove more lucrative. HelloGiggles has just signed with Say Media, the digital network that also sells advertising on behalf of xoJane.com, the blog of famed magazine editor Jane Pratt.

Another celeb ladies' lifestyle site, Gwyneth Paltrow's Goop, has gotten into the business of selling content with recently launched mobile-app city guides for $3.99 a pop.

Jermaine Dupri, who has produced records for Mariah Carey and Procter & Gamble, has entered into a relationship with Hearst Corp's digital agency iCrossing , which will provide search marketing and social-media counsel for Global14.com, his website for fans. While there are no advertisers on the site today, he's interested in acquiring them.

"If Twitter were to disappear tomorrow, where would Lady Gaga or Justin Bieber be without all those millions of followers? What's your strategy to find all those people again?" asked Mr. Dupri. Global14, to which his 33,600 fans also contribute, includes his blog about fashion, cars and women.

But while advertisers are clearly gaga for social media such as Facebook and Twitter, will they want to give a Gaga social network a spin in the future?

As is always the issue with new media, finding enough people to market to will be the first hurdle. "It's much easier for an advertiser to run an ad in a magazine with Lady Gaga on the cover, but that 's not to say that won't change," said Jeff Hinz, managing partner-U.S. digital director for another agency, Mediacom.